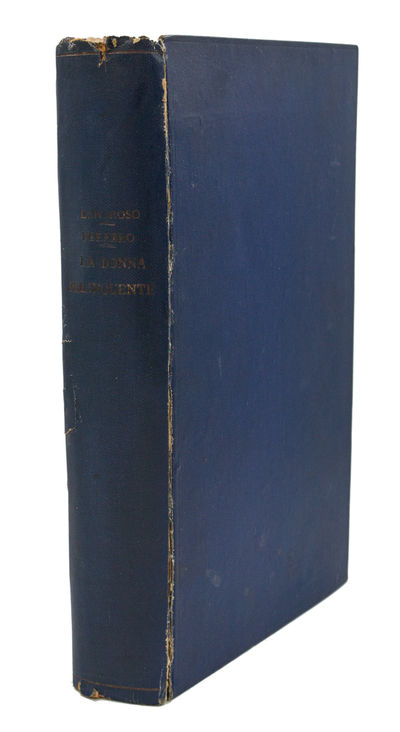 by LOMBROSO, Cesare (1835-1909)-FERRERO, Guglielmo (1871-1942)
8vo (242x154 mm). XI, [1], 640 pp. With the engraved portrait of Messalina on the title-page, 8 plates (4 folding) and several diagrams, photographs and statistical tables in text. Original (?) blue cloth, gilt title on spine (joints weakened). A good copy, only slightly browned, plate VI loose.
RARE FIRST EDITION of this very influential work on criminal woman, considered as the first modern criminology text to exclusively focus on the subject.
A first draft of the work, written in collaboration with Salvatore Ottolenghi, had appeared two years earlier in the "Giornale della R. Accademia di Medicina" (nos. 9-10). The final draft was written in collaboration with the author's son-in-law, the talented law student Guglielmo Ferrero.
"Lombroso's personal and domestic life was apparently tranquil. In 1869 when he was 34 years old he married a young 22 year-old Jewish girl from Alexandria who later presented him with two daughters, Paola and Gina. We are told that both because of their bringing into their father's orbit of relationships important socially conscious women, and because of their marriages to professionally related men (Gina to G. Ferrero and Paola to M. Carrara), they 'brought fresh worlds of ideas into contact with that of their father'. It was with Gina's husband that Lombroso spent many long hours in his laboratory examining the skulls of criminals and with whom he wrote The Female Offender. During Lombroso's later life and their maturity, his daughters performed many tasks for him in his Turin home-reading and answering much of his correspondence and literature in the growing field of criminal anthropology, translating and unofficially editing his writing and the Archivio di Psichiatria" (M.E. Wolfgang, Pioneers in Criminology: Cesare Lombroso (1825-1909), in: "The Journal of Criminal Law, Criminology, and Police Science", 1961, LII, 4, p. 364).
In Criminal Woman, Lombroso applies to women the same theories expressed in his Uomo delinquente ('Criminal Man'), published in 1876, the work that marks the foundation of criminal anthropology. In the text, he outlines a comparative analysis of "normal women" opposed to "criminal women" such as "the prostitute". Special consideration is given to "pathological anomalies, investigations of female brains, anthropometry, facial and cephalic anomalies, atavistic origins, tattooing, the born criminal, occasional criminals, hysterical offenders, crimes of passion, suicides, criminal lunatics, epileptic delinquents and moral insanity. Although he asserts that female born criminals are fewer in number than male, he contends that the former are much more ferocious" (Wolfgang, op. cit., p. 373).
Lombroso was convinced of the pathological nature of the born criminal (whom he distinguishes, medically and legally, from the casual offender who commits a crime driven by special circumstances or needs) and of the possibility of explaining and predicting moral degeneration from its physical abnormalities. According to Lombroso, there is a correlation between somatic and mental deformities with reference to specific factors as atavism, degeneration, and epilepsy. He believes that criminals are more often found to suffer from physical, nervous and mental abnormalities than non-criminals, and that these abnormalities are either inherited or the result of physical degeneration. Lombroso also deals with the legal implications of his theories, particularly in relation to the issue of "moral insanity", understood as a serious disturbance of social behavior. He thus initiated a branch of psychiatric research which has cast new light on the complex problem of criminal responsibility (cf. M. Gibson, Born to Crime. Cesare Lombroso and the Italian origins of Biological Criminology, Westport, 2002, passim).
Catalogo unico, IT\ICCU\UFI\0294209; Garrison-Morton, Morton's Medical Bibliography. An annotated Check-list of Texts Illustrating the History of Medicine, Cambridge, 1991, no. 174; D.H. Hook & J.M. Norman, eds., The Haskell F. Norman Library of science & medicine, San Francisco, 1991, 1384. (Inventory #: 31)
$2,800.00 add to cart Available from Govi
Share this item