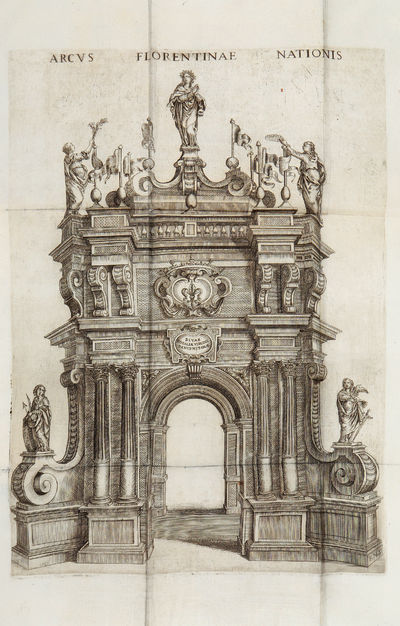 by PARUTA, Filippo (1552-1629)
4to (200x145 mm). Collation: [π]4 †4 A-T4 V2 X4 Y2 Z4 [χ]2. Half-title, engraved frontispiece, [12], 176, [4: errata corrige] pp. and [4] folding plates engraved by Francesco Nigro and Francesco La Barbera after Gerardo Astorino and Vincenzo La Barbera. Later cardboards, original sprinkled edges. Minor restorations to the outer margin of the first leaves without loss, small worm track in the gutter of a few leaves not affecting the text, tears repaired along the folding of one plate, all in all a very good copy.
EXTREMELY RARE ORIGINAL EDITION of this festival account attributed to Filippo Paruta, but edited by his son Simplicio, who also signs the dedication to the Senate of Palermo, and published posthumously under the name of his other son Onofrio.
In the note to the reader Onofrio provides a detailed list of the works (orations, occasional writings, inscriptions for ephemeral architectures, etc.) of his father Filippo, who was the secretary to the Palermo Senate and the major responsible for the iconographic program realized on the occasion of the 1625 festivity.
At the beginning of the 1620s the viceroy Emanuele Filiberto of Savoy rebuild the Accademia dei Riaccesi, which gathered in the Royal Palace, and entrusted the scholar and mathematician Carlo Maria Ventimiglia with the direction of the academy. Around his figure gravitated many of the artists and scholars who designed the program and the solemn procession of the relics of St. Rosalia, held in June of 1625 as a sign of gratitude for deliverance from plague. Among them were the painters and architects Gerardo Astorino and Vincenzo La Barbera, the engraver Francesco Negro, the scholar Martino La Farina, who conceived the allegorical arch of the Genoese nation, and, above all, Filippo Paruta, who was linked to Ventimiglia also by a common passion for numismatics and antiquities. Paruta was involved in all literary activities related to celebratory events since the end of the sixteenth century. In 1625 he inspired the triumphal arch that the Senate erected in Piazza Villena and was responsible for the account of the festivities, which however was actually published only after his death in 1651.
The constitution of such a large and complex team to be entrusted with the creation of the apparatuses testifies of the importance of that event that officially marked the beginning of the cult of St. Rosalia. The solemnity of 1625 had no immediate follow-up and only in 1649 the feast of St. Rosalia was formalized with all those peculiarities that would characterize the following decades. In 1625, in addition to the impressive processions and solemn ceremonies to which all local communities, religious and civil, took part, two magnificent horse rides were organized; one, in particular, took place at the conclusion of the festivities, after the solemn mass in the cathedral. Then followed fireworks, organized by the German nation, tournaments and jousts. At the very end the nobility walked in gala dresses along Via Colonna (cf. M. Sofia di Fede, La festa barocca a Palermo: città, architetture, istituzioni, in: "Espacio, Tiempo y Forma", series VII, t. 18-19, 2005-2006, pp. 49-75; see also M. Vitella, Il primo Festino, in: M.C. Di Natale, "S. Rosaliae patriae servatrici", Palermo, 1994; and V. Petrarca, Genesi di una tradizione urbana. Il culto di S. Rosalia a Palermo in età spagnola, Palermo, 1986, p. 82).
Catalogo unico, IT\ICCU\PALE\004559; S.P. Michel, Répertoire des ouvrages imprimés en langue italienne au XVIIe siècle conservés dans les bibliothèques de France, Paris, 1976, VI, p. 80; Biblioteca centrale della Regione siciliana "Alberto Bombace", Sanctae Rosaliae Dicata, Bibliografia cronologica su Santa Rosalia, Settembre 2004, pp. 12-13; G.M. Mira, Bibliografia siciliana, Palermo, 1881, II, p. 186; A. Mongitore, Bibliotheca sicula sive de scriptoribus siculis, Palermo, 1707-1714, I, p. 293 and II, p. 174; M. Cornelles, V. Manuel et al., eds., La fiesta barroca. Los reinos de Nápoles y Sicilia (1535-1713), Palermo, 2014, ad indicem. (Inventory #: 33)
$12,500.00 add to cart Available from Govi
Share this item