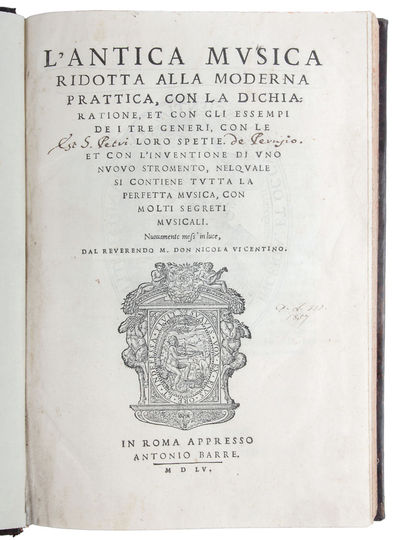 by VICENTINO, Nicola (1511-1572)
Folio (287x194 mm). 146, [6] leaves and [8] woodcut folding plates. Signatures: A-Z6 AA6 BB8. On the title page printer's device, showing Orpheus under a tree playing the viola. Author's portrait, at the age of 44, printed on title-page verso. Beautiful woodcut decorated initials. Music notation in text. Later polished calf gilt, marbled edges. Contemporary ownership's inscription on the title page: 'Est S. Petri de Perusio'; below the initials 'D.d.M.' and the date '1857'. Small marginal tear to l. D4 with no damage to the text, title page slightly soiled, a nice copy printed on a fine, crispy paper.
A beautiful copy, complete with all the eight plates, of the extremely rare first edition, first issue, of one of the most influential music theory books of the sixteenth century. The book is dedicated to Cardinal Ippolito II d'Este.
The Renaissance musicologist Edward Lowinsky acknowledges Vicentino as "the greatest revolutionary of the sixteenth century [...] The epochal significance of his treatise lies in the fact that here is the first esthetics of music in which every element of sound: melody, harmony, rhythm, texture, choice of instruments, manner of performance is critically examined as to its expressive potential, and in which the relativity of each element in varying contexts is demonstrated" (E.E. Lowinsky, The musical avant-garde of the Renaissance or: The peril and profit of foresight, in: "Art, science and history in the Renais- sance", C. S. Singleton, ed., Baltimore, MD , 1967, p. 133).
Unlike most early theorists, Vicentino, who was a pupil of the Flemish-Venetian composer Adrian Willaert, did not simply summarize the practice of his time, but also attempted to adapt the Greek musical modes to the purpose of modern harmonic singing and instrumental performance. His major contribution is the adaptation of the ancient Greek chromatic and enharmonic genera to modern polyphonic practice. Anticipating Vincenzo Galilei and Claudio Monteverdi, Vicentino also expressed avant-garde's views on the relation between music and text. He stated that, in order to better express the feelings of a verbal text, music should be sometimes allowed to break the strict rules of counterpoint.
"For centuries, tuning systems were central to music theoretical discussions as they laid out the raw materials for composition. However, surviving compositions that explicitly require a specific tuning system are rare. Nicola Vicentino's treatise Ancient Music Adapted to Modern Practice provides an original theory of intervals and tuning, as well as compositions that strive to embody his theory. Vicentino's musical philosophy involves the listener's emotions and reason and argues that perception is an important consideration in the development of theories and in writing music. Vicentino's compositions offer a unique opportunity to investigate perception in the context of a novel tuning system and elucidate what kinds of musical choices and contexts best highlight the nuances of his system. The present paper reports the results of two perceptual studies that investigated the ability of musically trained listeners to discriminate between short musical excerpts for voices presented in Vicentino's 31-tone tuning system and in the standard 12-tone equal temperament. Modern tuning software has made it pos- sible to have natural voices singing, but to precisely control the tuning of each note, all the while leaving the natural variation of jitter and vibrato if needed. Musical and acoustical correlates were also examined to determine whether musical context had an effect on discrimination performance" (S. McAdams et al., Perception of Vicentino's 31-tone tuning system, in: "Journal of Interdisciplinary Music Stud- ies", 8/1&2, 2014-2016, p. 158).

"This treatise is a major contribution to the growing movement that sought to free both theory and practice from a dependence on the traditional ecclesiastical modes. Of particular interest is his description of the 'arcicembalo', a unique harpsichord that was built with two keyboards, each containing three orders of keys. This construction allows the performer to play intervals smaller than a semitone as well as the possibility of playing pure intervals against tempered intervals in any key. Thus, for the first time, ancient Greek theory as well as progressive free chromaticism could be realized, and from this would gradually emerge 'the stabilization tuning into the equal temperament of more modern times'. Vicentino was also interested in both the melodic and vertical functions of intervals, which is remarkable for this period. Understandably, his theories generated fervent opposition both from his contemporaries and later from the likes of Zarlino, Artusi, and Doni. The French printer Antonio Barré, although primarily a printer of music, produced twenty music books during his career, of which this is the most famous. Vicentino's treatise is also significant as a very early example of the printing of the natural sign from type" (R.H. Cowden, A Collector's Journey: Notable Music Books Written Prior to 1800, New Castle, DE, 2015, pp. 24-25).
Little is known of Nicola Vicentino's early life. He was born in Vicenza, and may have studied with Adrian Willaert in Venice. He acquired an early interest in the contemporary humanistic revival, in- cluding the study of ancient Greek music theory and performance practice, about which little was known, but was then being uncovered, through the work of scholars such as Girolamo Mei and Gian- giorgio Trissino. At some time in the 1530s or early 1540s he went to Ferrara, which was to become the center for experimental secular music in Italy from the middle to the end of the 16th century. Apparently, he served as a music tutor to the Duke of Este as well as some of his family members, and some of Vicentino's music was sung at the court of Ferrara. During the late 1540s his reputation as a music theorist grew. He established his reputation as a composer with his publication of a book of madrigals in Venice in 1546, and in 1551 he took part in one of the most famous events in 16th centu- ry music theory, the debate between Vincente Lusitano and himself in Rome in 1551. The topic of the debate was the relationship of the ancient Greek genera to contemporary music practice, in particular whether contemporary music could be explained in terms of the diatonic genus alone (as Lusitano claimed) or (as Vicentino claimed) was best described as a combination of the diatonic, chromatic, and enharmonic genera, the last of which contained a microtone. The debate was rather unlike those among contemporary musicologists, being more like a refereed prize fight, with a panel of judges; they awarded the prize to Lusitano (see S.J. Brannon, Books about Music in Renaissance Print Culture: Authors, Printers, and Readers, Chapel Hill, NC, Diss., 2016, pp. 67-73). Unbowed, Vicentino continued his experiments, and went on to build the archicembalo which could play the music he described in his pub- lications. Only one keyboard instrument using his 31-note-to-the-octave system survives from the Re- naissance: the 'Clavemusicum Omnitonum Modulis Diatonicis Cromaticis et Enearmonicis', built by Vito Trasuntino of Venice in 1606 to play the diatonic, chromatic and enharmonic. It is on display at the International museum and library of music in Bologna. After a short time in Rome, Vicentino returned to Ferrara, and later moved to Siena. In 1563 he became maestro di cappella at the Vicenza Cathedral, thus returning to his home city, but only briefly, for he accepted a position in Milan in 1565. Around 1570 he had some connection with the Bavarian court in Munich, though he may never have gone there. He died in Milan during the plague of 1575–1576, though his exact date of death is not known (cf. H. W. Kaufmann, The Life and Works of Nicola Vicentino, New Brunswick, N.J, 1966, pp. 15- 48).
The book was later reissued by Barré with a new title page dated 1557. Copies of both issues complete with all the eight plates are extremely rare. The plates show diagrams of the keys of the clavichord invented by Vicentino. According to Worldcat, only one copy is recorded in America at the Metropolitan Museum of New York.
Edit 16, CNCE30787; N. Vicentino, Ancient music adapted to modern practice, M. Rika Maniates & M.V. Palisca, eds., New Haven, 1996; RISM, B6, p. 861; W. Schmieder, Musik, no. 1316; Cowden, no. 22; Grove, V, 495; Eitner, X, 76; Wolffheim, 1093; Gregory-Sonneck, p. 281; Hirsch, 591; Fétis, VIII, 338. (Inventory #: 40)
$20,000.00 add to cart Available from Govi
Share this item