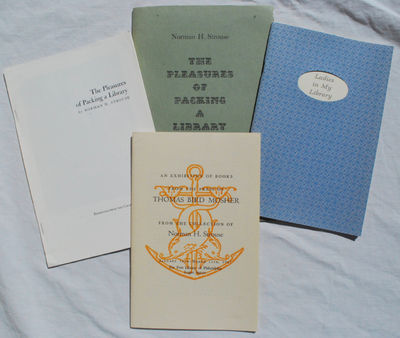 signed
by Norman Strouse (1907-1993)
Like New. Norman H. Strouse was the head of the J. Walter Thomspon advertising agency. In 1955 Strouse was promoted to president of the agency; Chief Executive in 1960; and Chairman from 1964 to 1968 when he retired. Earlier in his career, Strouse popularized the concept of the two-car American family. As suburbia boomed after World War II, Strouse worked in Detroit on the Ford account. Ford was reorganizing and trying to shed its reputation for antiquated automobiles. Strouse helped update Ford's image and persuade the public of the desirability of having one car for the husband commuting to work and another for the modern wife's homemaker errands. After retiring in 1968, Strouse focused on his hobby of collecting rare books, fine printing, and bindings. He specialized in books by Thomas Carlyle, works bound by Thomas Bird Mosher, and 12th- to 16th-century illuminated manuscripts. Strouse donated more than 1,500 volumes to the university of California at Berkeley and a Carlyle collection the University of California at Santa Cruz, where he taught about books. The 4 publications offered here include: 1) STROUSE. The Pleasures of Packing a Library. 500 copies printed for friends of Norman and Charlotte Strouse of which 200 copies are for presentation to members of the Roxburghe Club and Zamorano Club, privately printed. Reprinted from the Fall & winter 1968 issue of The Book Club of California Quarterly News-Letter. 1 woodcut headpiece. Green printed wrappers, stapled. 2) STROUSE. The Pleasures of Packing a Library. Reprint from the California Librarian, July 1968. Black-and-white frontis. port. of Strouse, 2 black-and-white illustrations. Self-wraps, stapled. 3) STROUSE. Ladies in My Library. Books and Letters from the Collection of Norman H. Strouse. September 3rd-November 17th, 1968. [Philadelphia, PA: The Free Library of Philadelphia, 1968. Bibliographic descriptions of 82 items, with a discussion of how female booksellers helped Strouse compete his library. Printed wrappers, stapled. 4) STROUSE. An Exhibition of Books from the Press of Thomas Bird Mother from the Collection of Norman H. Strouse. January 16th - March 12th, 1967. [Philadelphia, PA]: The Free Library of Philadelphia, 1967. Describes 156 items. Printed wrappers, stapled. 5) The 2 Typed Letters, Signed are from Norman Strouse to Pall Bohne in their original stamped and post-marked envelopes, dated February 18, 1969 and April 1, 1969 (the last letter signed by Strouse's secretary in his absence) includes gossip about visiting bookstores, the collecting of Mosher materials, and the exchange of printed books between the two. (Inventory #: KBO617-003)
$75.00 add to cart Available from
John Howell for Books
Share this item