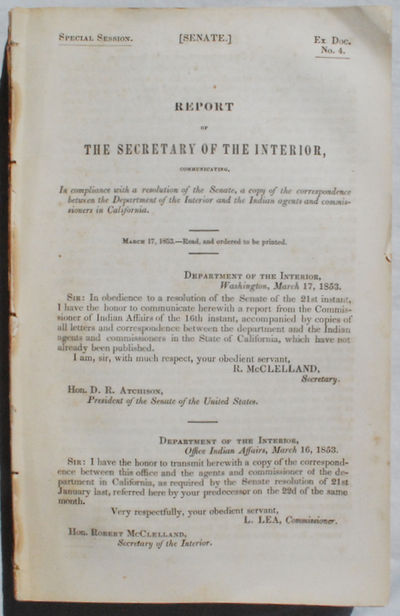 by Edward F. Beale (1822-1893) et al
Washington, D.C.:, 1851. Acceptable. Various Publishers, 1851-1855. 8vo. 9 x 5 3/4 inches. Various Paginations. Please inquire for a full list of items in this lot. Most of the items are dis-bound, some removed entirely from a larger volume, some without their cases, 2 in contemporary cloth (these would be the Annual Reports of the Commissioner of Indian Affairs, 1855 and 1858. Sold AS IS. These materials were brought together by a single individual who sought to understand how Indian treaties were negotiated and implemented in the first decade of California Statehood. The main characters include Western pioneers such as Edward F. Beale, who comes across as trying to fix the problems caused by Indian Agents Oliver M. Wozencraft (1814-1887), Redick McKee and George W. Barbour. The latter 3 individuals negotiated 18 treaties with California Native American tribes, only to have their treaties and commitments rejected by the United States Senate. Their efforts were so incompetent that the documents relating to their negotiations were sealed from public view until 1905. In the meantime, the United States Government sent Edward Beale to correct their mistakes; Beale made some effort to put right the Department of Indian Affairs in California and deal fairly with the Indians. Much of this material are collections of documents written by the principals in California and Washington DC in an effort by the United States Senate to understand the Treaties submitted to the Senate in 1851. Later documents reveal Beale and his successors attempting to put the affairs of the Department of the Interiors Bureau of Indian Affairs on more competent footings. Other characters whose affairs were touched by these matters include John Charles Fremont, Thomas Hart Benton, and others. Some of the documents submitted date back to the 1840s. All together, the documents provide an extensive survey of the United States' competing policies with regards to the California Indians, the convoluted legalities of land titles, the opportunistic men looking to gain a leg up from California's entry into the Union, and the early operations of the Department of the Interior. (Inventory #: DG915-021)
$250.00 add to cart Available from
John Howell for Books
Share this item