Of the Characters of Women: An Epistle to a Lady 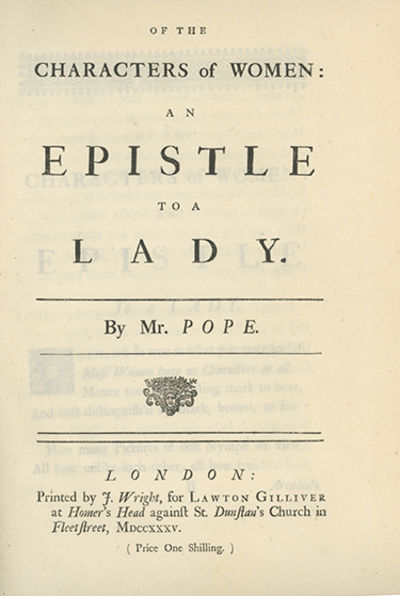 by POPE, ALEXANDER
London: Printed by J. Wright, for Lawton Gilliver, 1735, 1735. First edition, second issue with the correct spelling of Fleetstreet on the title-page. Griffith 361; Foxon P-917; NCBEL II, 507. Edges a little rubbed; gutter starting at the foot of the spine; fine, large, untrimmed copy.. Folio, modern green quarter morocco, marbled paper boards, gilt lettering, untrimmed. Half-title, "Advertisement" leaf and leaf of publisher's ads present. The "Advertisement" leaf at the end is conjugate with the publisher's advertisements, though with the signature mark B. Pope's thinly veiled poem to Martha Blount, with whom he had a life-long flirtation, romance and friendship. The "Advertisement" leaf was added as a pronouncement that the author "declares, upon his Honour, no one character is drawn from the Life, in this Epistle." This leaf is usually bound at the front, following the title-page, leaving its conjugate leaf of publisher's advertisements discarded. This copy is unusual in having them both, as issued. Bookplates of Frederic Locker and Louis and Anne Marie Davidson on the front paste-down. (Inventory #: 27502)
$900.00 add to cart or Buy Direct from
Brick Row Book Shop
Share this item