The Ideal Book: Two Essays Jointly Awarded the Prize Offered by the Limited Editions Club for the Best Essay Upon the Subject, by Francis P. Dill and Porter Garnett 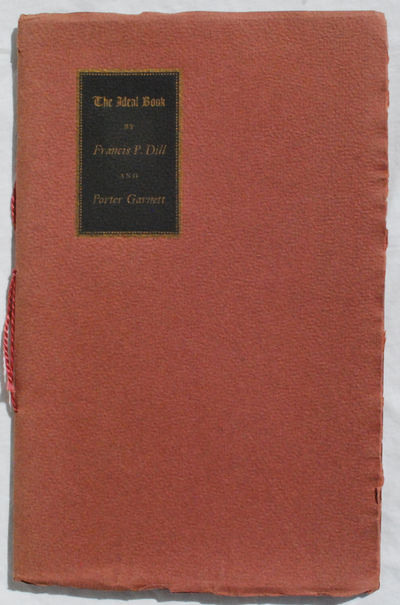 by Francis Parsons Dill (1909-1989) and Porter Garnett (1871-1951)
New York:: Directors of the Limited Editions Club,, 1931. First Edition. Paperback. Very Good. FIRST EDITION, LIMITED to 2,600 copies, printed by The Walpole Printing Office of New Rochelle, New York, printed in Linotype Janson with Goudy Text on Marlowe paper. Pamphlet. 8 3/8 x 5 1/4 inches. 42, [2] pp. Text clean, unmarked. Printed wrappers, string tied, stamped in black and gilt on front cover; binding square and tight, rubbed, yapp edges worn, faint toning. Internally fine, but overall Very Good. This pamphlet contains 2 essays awarded a prize for the Best Essay on the Ideal Book, selected from 200 submissions from all over the United States, and seven other countries; the five judges of the essays were Frederic W. Goudy, Frederic G. Melcher, Mitchell Kennerley, A. Edward Newton, and George Macy. The Dill essay outlines for the makers of good books what qualities the purchasers and owners of these books would like to find in their books; Garnett's essay outlines for the buyers of well-printed books the qualities of technique which they have the right to expect the makers of these books to possess. At the time these essays were written, Francis Dill was a student of Porter Garnett at the the Laboratory Press at the Carnegie Institute of Technology. In 1922 Porter Garnett became professor of graphic arts at the Carnegie Institute of Technology in Pittsburgh, Pennsylvania, teaching traditions, development, and ideals of printing. There, Garnett founded the Laboratory Press, as the only program in the United States for the teaching of fine printing until the press closed in 1935. The Press was the only one dedicated to education in printing as a fine art. In 1932, Garnett was awarded the American Institute of Graphic Arts Medal. (Inventory #: GF417-006)
$40.00 add to cart Available from
John Howell for Books
Share this item