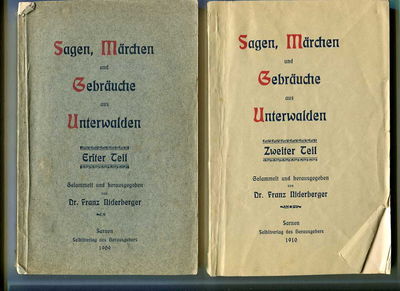 by Niderberger, Franz
Sarnen, Switzerland: Huber, Stans, 1909-1910. Paperback. Good. Octavo (20.5 cm), pp. 172, vi (Eriter Teil); 173, vii (Zweiter Teil). Beige and gray paper wrappers with titling. Some sunning and foxing, former owner's names on both title pages. Originally published in three parts, of which these are the first two, relating the legends of the region. Volume one is missing cover material at head and tail of spine, volume two has a few small closed tears. Missing is the third volume on religious manners and customs.Uncertain edition: title pages dated 1908 and 1909 respectively, with wrappers dated at 1909 and 1910.Niderberger was an Unterwalden native, from a forest-canton region of the Old Swiss Confederacy in central Switzerland. According to the Historisches Lexikon der Schweiz, he was a community leader and a lawyer who fought for the expansion of the secret popular vote and the right of initiative and referendum. (Inventory #: 21549)
$150.00 add to cart Available from Elk River
Share this item