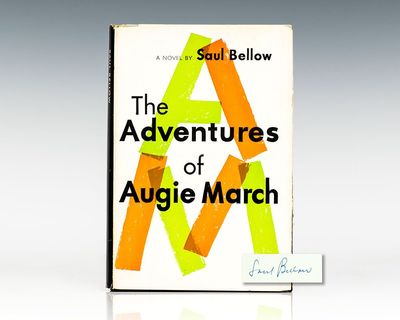 by Bellow, Saul
New York: The Viking Press, 1953. First edition of Bellow's first National Book Award winning novel. Octavo, original cloth, salmon topstain. Signed by Saul Bellow on the front free endpaper. Near fine in a very good first issue dust jacket with the John Steinbeck ad on the rear flap and no reviews. Jacket design by Robert Hallock. The Adventures of Augie March comes on stage with one of literature's most famous opening lines. "I am an American, Chicago born, and go at things as I have taught myself, free-style, and will make the record in my own way: first to knock, first admitted." Bellow quickly found a receptive audience for his new energetic style. The critic Irving Howe took note of Bellow's "free style" manner, calling it "the first major new style in American prose fiction since those of Hemingway and Faulkner." This novel went on to win the National Book Award for 1954. Both Time magazine and the Modern Library Board named it one of the hundred best novels in the English language. (Inventory #: 58004)
$1,800.00 add to cart or Buy Direct from
Raptis Rare Books
Share this item