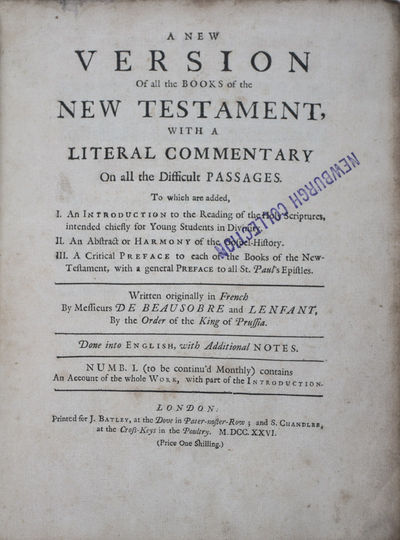 by Messieurs De Beausobre and Lenfant (French)
London: Printed for J. Batley, at the Dove in Pater-noster-Row; and S. Chandler, at the Cross-Keys in the Poultry; J. Batley, at the Dove in Pater-noster-Row; and J. Chandler, at the Cross-Keys in the Poultry, 1727. Ex-Library First edition. Hardcover. poor to g+. Quarto. xi, 256, xi, blank, 13-151 (1)pp. Original calf with gilt lettering and tooling on spine; raised bands. Historiated headpieces, decorative initials and endpieces. Title page of the Matthew Gospel with publisher's device on title page. Both written originally in French by Messieurs De Beausobre and Lenfant, by the order of the King of Prussia, respectively written... and published by the late King of Prussia. Done into English, with additional notes. Numb. I (to be continu'd Monthly)... The 256 page introductory essay describes at length the author's knowledge of ancient Jewish and non-Jewish sources. They explain their understanding of Devine wisdom as inspiration and truth, both in the life and time of Jesus and in their own day. The French edition was published in Amsterdam in 1718, translated and annotated by Isaac de Beausobre and Jacques Lentfant. I. de Beausobre (1659-1738), a French Protestant, migrated to Berlin in 1694, where he became chaplain to the King of Prussia, and counsellor of the royal Consistory. J. Lenfant (1661-1728) was pastor of the French Protestant church at Berlin and chaplain to the King (DM 3808). Beausobre was best known for his history of Manichaeism and Lenfant for his many works on church history. According to Thoams Thornton this edition distinguishes itself from other early translations of the Luther Bible in that it marks the supplementary words with considerable care. The english translation was done by Jeremiah Batley and Nonconformist minister Samuel Chandler (Steven DeRose, List of English Bible Versions, Translations, and Paraphrases). Our copy is complete with only St. Matthews being published in English (Herbert 980). Binding with front cover detached but present, back joint cracked but firm with small chips at head and tail of spine; wear along edges and rubbed. Few inked words on inside cover and detached front free endpaper, foxed. Library stamp across title page. Back endpapers foxed and starting at inside back cover. Some age toning of block. Binding in overall poor to fair, interior in good+ condition. (Inventory #: 42976)
$750.00 add to cart or Buy Direct from
Eric Chaim Kline Bookseller
Share this item