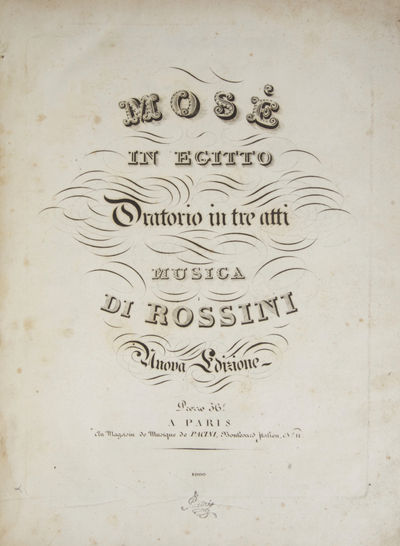 Mosè in Egitto, to a libretto by Andrea Leone Tottola after the Old Testament and Francesco Ringhieri's L'Osiride, was premiered in Naples at the Teatro San Carlo on March 5, 1818.

"In its original form, the Neapolitan version of 1818-19, Mosè in Egitto is one of the freshest and dramatically most effective of Rossini's opere serie, and there is a strong case for preferring this version to the somewhat bloated and more arbitrarily structured revision which Rossini prepared for the Paris Opéra in 1827 under the title Moïse et Pharaon." Richard Osborne in Grove Music Online. (Inventory #: 26396)
$316.00 add to cart or Buy Direct from
J & J Lubrano Music Antiquarians
Share this item

Autograph letter signed to Hunt B. Jones at Haverford College


(click for more details about Autograph letter signed to Hunt B. Jones at Haverford College)