CONTROVERSY BETWEEN THE REV. JOHN THAYER, CATHOLIC MISSIONARY, OF BOSTON, AND THE REV. GEORGE LESSLIE, PASTOR OF A CHURCH IN WASHINGTON, NEW-HAMPSHIRE 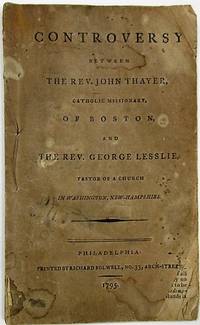 Thayer was the first American-born New Englander ordained into the Roman Catholic priesthood [XIV Catholic Encyclopedia 556]. Educated at Yale and a Congregational Clergyman, he attracted notoriety for his conversion. As "the first converted American divine" [DAB], he was known as 'John Turncoat.' Protestants, especially in New England, viciously attacked him. Evidently Thayer gave as good as he got: he was well-known, as the Catholic Encyclopedia puts it, for "his erratic and contentious temper." Because of it, "he failed as a pastor" to the Catholic Church in Boston.
This rare pamphlet defends the infallibility of the Catholic Church and points out various defects in the doctrines of his erstwhile Protestant colleagues. Reverend Lesslie naturally disagreed: Catholicism's "pretended infallibility" is "a cunningly-devised fable, a mere delusion, invented, and imposed on the people of that communion, not to serve our Lord Jesus Christ, but the bellies of the teachers and spiritual guides of the Church." Thayer takes up the challenge, and strikes back.
Evans 29620. ESTC W14258 [3]. Parsons 149 [incorrect collation]. (Inventory #: 34014)
$2,000.00 add to cart or Buy Direct from
David M. Lesser, Fine Antiquarian
Share this item
David M. Lesser, Fine Antiquarian Books LLC
Offered by

STATIONERY SHOWING THE ICONIC LOG CABIN, WITH AMERICAN FLAG FLYING, A BARREL OF CIDER IN THE FRONT YARD, AND A PORTRAIT OF HARRISON, WITH ACCOMPANYING LETTER IN INK MANUSCRIPT DATED SEPT. 8, 1840 FROM BOSTON


(click for more details about STATIONERY SHOWING THE ICONIC LOG CABIN, WITH AMERICAN FLAG FLYING, A BARREL OF CIDER IN THE FRONT YARD, AND A PORTRAIT OF HARRISON, WITH ACCOMPANYING LETTER IN INK MANUSCRIPT DATED SEPT. 8, 1840 FROM BOSTON)
View all from this seller>