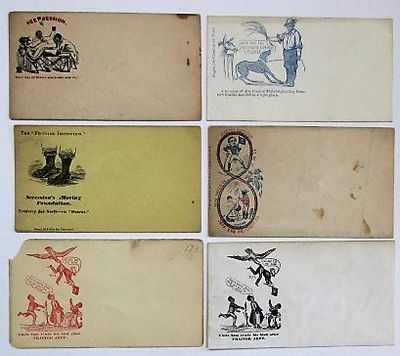 1. Three well-dressed male house slaves sit at a small table, one with two legs of his chair off the ground and his legs on the table's edge. "SEE-SESSION" printed above the scene with a hand pointing a finger in place of a hyphen. The caption beneath the scene reads, "'Twill take all Massa's money and more too." Picture in black ink, words in red. No imprint.
Weiss C-BL-29.
2. A slave stands holding a leash with a dog wearing a collar engraved "JEFF;" a mule looks over a fence and says, "Jeff has the feelings of a Prince of Wails." Printed in blue ink. Philadelphia: Magee, 316 Chestnut St.
Weiss C-BL-35.
3. "The 'Peculiar Institution'" printed above the bare feet of a slave. Beneath is the caption, "Secession's Moving Foundation. Tendency due North - via 'Monroe'." Cincinnati: Harpel, 3d & Vine Sts. Printed in black ink.
Weiss C-BL-41
4. "JEFF THE DICTATOR" printed over a rope in a figure eight configuration. In the top loop is a picture of Davis in uniform, holding his sword and a flag with skull and crossbones. The words, "As he is" printed to the right. The lower loop depicts Davis shirtless and shoeless with only a torn pair of pants, digging with hoe while a slave stands fully dressed behind him holding a whip. The words, "As he should be" printed to the left. "JEFF THE DIG-TATER- ER" printed at the bottom. Printed using red and blue inks. New York: D. Murphy's Son, Print., 65 Fulton & 372 Pearl Sts.
Weiss C-P-J-46.
5. Jefferson Davis is held in the talons of a flying eagle with the name "JEFF" printed to his left and the words, "Oh! Lord! Let me alone!" coming from his mouth. A flag with a skull and crossbones is in his hands. Three slaves-- a woman and two young men-- stand beneath him. The woman says, "Golly, Mas'a Jeff! You's in a bad fix sure enough!" Caption at the bottom: "Uncle Sam sends his bird after Traitor Jeff." Printed in red ink.
Weiss C-BL-55.
6. Variation of no. 5: printed entirely in black ink.
Weiss C-BL-55a. (Inventory #: 33966)
$375.00 add to cart or Buy Direct from
David M. Lesser, Fine Antiquarian
Share this item
David M. Lesser, Fine Antiquarian Books LLC
Offered by