UNION PACIFIC RAILROAD. A GEOLOGICAL & AGRICULTURAL SURVEY OF 100 MILES WEST OF OMAHA. BY THE AMERICAN BUREAU OF MINES 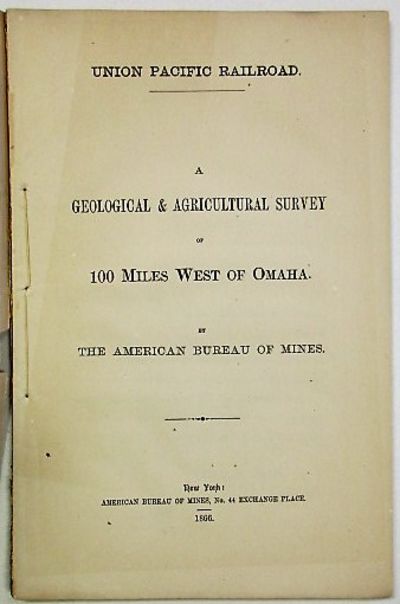 A Report, by Thomas Egleston on behalf of the American Bureau of Mines, on the topography of Omaha; the Platte and its tributaries and their valleys; the geology of the Nebraska Territory; bluffs, drifts, boulders, climate, soil, formation of the rolling prairie, agriculture, trees, fences, plantings, mill sites.
"Nebraska must remain an agricultural country. For this it is destined by its geographical position, no less than its fertile soil and its climate." It will control the western market, "and the gold and silver of the mountains will be exchanged in this Territory for grain and stock." FIRST EDITION. BRE References Relating to the Union Pacific Railroad 49. Sabin 22054. Not in Eberstadt, Graff, Soliday, Decker. (Inventory #: 33987)
$375.00 add to cart or Buy Direct from
David M. Lesser, Fine Antiquarian
Share this item
David M. Lesser, Fine Antiquarian Books LLC
Offered by