INTERESTING TO EXPRESS SHIPPERS! "DEATH IN THE LAST DITCH!" HOW REGARDED BY "AMERICAN" STOCKHOLDERS. OFFICE OF THE AMERICAN EXPRESS CO. NO. 122 & 124 BROADWAY, N.Y. FEBRUARY 15, 1867 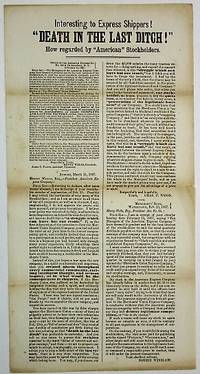 This is a rare, evidently unrecorded, and interesting broadside illuminating the cutthroat competition for domination of the express trade. Henry Wells, President of the American Express Company, and James C. Fargo, its Assistant Treasurer, announce that the Company has decided to "omit the usual quarterly dividend." Instead, the Company will devote all its earnings to the struggle against The Merchants' Union Express, "an organization formed to black-mail this and other established Express Companies." Wells and Fargo promise "to expend every dollar of its current and surplus earnings, and if necessary to assess its stockholders, to ensure COMPLETE AND LASTING VICTORY." These founders of the Wells, Fargo Company formed the American Express Company in 1850.
Their decision did not sit well with at least two stockholders whose objections are printed in this broadside. Charles P. Wood writes that "your policy was conceived in folly, is adhered to in mere desperation, and should be abandoned at once." Wells and Fargo have begun "a war in a spirit so autocratic and imperious, that you created alarm throughout every commercial community..." Norris Winslow concurs: "The generous support given from all quarters to the Merchants' Union Express Company, is conclusive evidence that the American people have no sympathy with a Company that publicly say they will destroy legitimate competition, or 'die in the attempt'."
Not located on OCLC or the online sites of AAS, Huntington, NYPL, NYHS, Harvard, Yale, U TX as of June 2017. (Inventory #: 33860)
$850.00 add to cart or Buy Direct from
David M. Lesser, Fine Antiquarian
Share this item
David M. Lesser, Fine Antiquarian Books LLC
Offered by

New York : [Published by B. Anthony, Manufacturer of Photographic Albums] , 1862
(click for more details about YOUNG AFRICA: OR, THE BONE OF CONTENTION)

Harrisburg, PA 1826
(click for more details about AUTOGRAPH LETTER SIGNED TO DR. FAIRLAMB, FROM WILLIAM HARRIS, A HARRISBURG PHYSICIAN, OPPOSING A BILL IN THE LEGISLATURE TO CREATE A NEW MEDICAL SCHOOL, WHICH WILL CAUSE THE CONFERRING OF MEDICAL DEGREES ON "MEN UNACQUAINTED WITH MEDICAL SCIENCE" AND "QUACKS.)
View all from this seller>