TO THE HONORABLE LUCAS P. THOMPSON JUDGE OF THE ELEVENTH JUDICIAL CIRCUIT OF VIRGINIA, IN WHICH SAID CIRCUIT, THE COUNTY OF NELSON IS EMBRACED. THE PETITION OF ROBERT H. SMITH RESPECTFULLY SHOWS.. 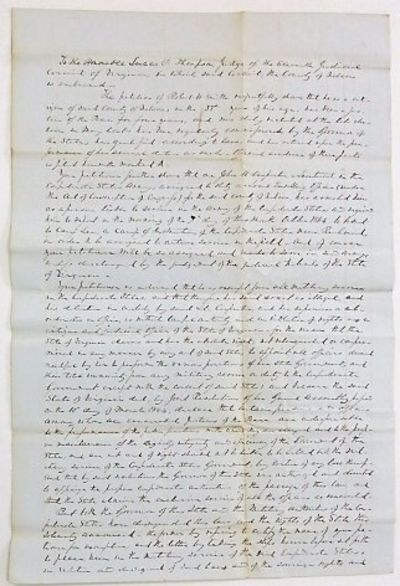 Smith's Petition alleges that Confederate Lieutenant John A. Carpenter, the Local Enlisting Officer for Nelson County, had arrested him as a person required to serve in the Confederate Army, and ordered him to report to Camp Lee, near Richmond, on October 7, 1864, for "active service in the field-- and of course your petitioner will be so assigned and made to serve in said army unless discharged by the judgment of the judicial tribunals of the State of Virginia."
Smith argues that, as a Justice of the Peace for four years and recently reelected to that position, "he is exempt from all military service in the Confederate States, and that therefore his said arrest is illegal, and his detention in custody by said Lt. Carpenter is without lawful authority and in violation of rights as a citizen and judicial officer of the State of Virginia." Virginia-- by Joint Resolution in March 1864-- has designated officers such as himself "indispensable to the performance of the public functions with which they are charged." They are necessary for the "maintenance of the dignity, integrity and efficiency of the Government of the State, and are not and of right should not be liable to be called into the military service of the Confederate States Government, by virtue of any law thereof."
Robert H. Smith signs the petition at the end; it is attested by Justice of the Peace Thomas M. Dickinson, and dated October 4, 1864. The petition's handwriting is neither Smith's nor Dickinson's. The docketed portion indicates that Smith won his case: "1864 Nov. writ sustained & prisoner discharged."
The U.S. Census lists Smith [1832-1870] as a Nelson County farmer, living with his wife Marianna [a/k/a Mary Ann McCue] and three young children. He died in Nelson County from consumption. He was the son of Capt. John Massie Smith 1794-1843]. Three of Robert Smith's four brothers-- Charles [1839-1912], Francis [1842-1877], and John [1843-1909] appear to have left college to join the Confederate Army.
Thomas M[orrison] Dickinson [1820-1882] was a farmer living in Massies Mill, Nelson County. He was appointed in March, 1865 as a member of the Committees of Safety representing Nelson County. He was married first to Abigail C. Witt Dickinson [1824-1854] in 1844, and then to Mary Elizabeth Dillard [1831-1889] in 1856 and had 8 children with her. [The Daily Dispatch: March 14, 1865, accessed at website of Perseus Digital Library, Tufts University.]
Lucas P. Thompson [1797-1866], born in Nelson County, was an Amherst County lawyer who became a judge in the General Court from 1831-1851, and then in the Eleventh Circuit Court from 1851-1866. He was appointed to the Court of Appeals but died before serving. He was a delegate to the 1829-1830 Virginia Constitutional Convention, and proprietor of Staunton Law School from 1839-1849. An Address by John R. Tucker. of Washington and Lee University, described Thompson as holding "a very high place in the esteem of the circuit where he presided for so many years." He had "learning, zeal and ability, great independence of character and inflexible decision of purpose." [Tucker, J.R.: REMINISCENCES OF VIRGINIA'S JUDGES AND JURISTS. 1895. Pages 5, 16.]
Lt. John A. Carpenter served in Co. H, 16th Regiment Virginia Infantry. He enlisted in March 1862 as a 2d Lieutenant and, by September 1863, the regiment's enrollment officer. In September, 1864 he was regularly stationed at Nelson County, as ordered by Col. J.O. Shields. [Confederate Army records on Fold3 website, accessed on July 17, 2017.]. (Inventory #: 33992)
$1,000.00 add to cart or Buy Direct from
David M. Lesser, Fine Antiquarian
Share this item
David M. Lesser, Fine Antiquarian Books LLC
Offered by

New York : [Published by B. Anthony, Manufacturer of Photographic Albums] , 1862
(click for more details about YOUNG AFRICA: OR, THE BONE OF CONTENTION)

Harrisburg, PA 1826
(click for more details about AUTOGRAPH LETTER SIGNED TO DR. FAIRLAMB, FROM WILLIAM HARRIS, A HARRISBURG PHYSICIAN, OPPOSING A BILL IN THE LEGISLATURE TO CREATE A NEW MEDICAL SCHOOL, WHICH WILL CAUSE THE CONFERRING OF MEDICAL DEGREES ON "MEN UNACQUAINTED WITH MEDICAL SCIENCE" AND "QUACKS.)
View all from this seller>