IN THE NAME AND BY THE AUTHORITY OF THE WHITE BOYS IN BLUE OF COLUMBUS, OHIO 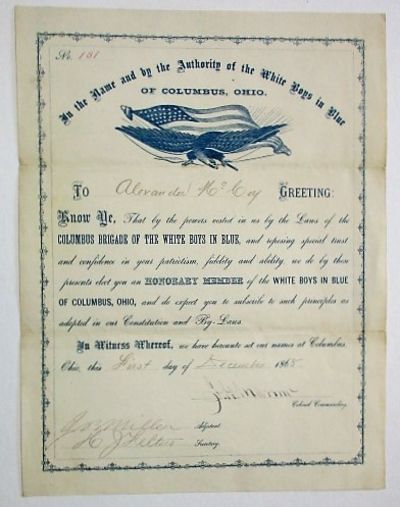 by White Boys in Blue
[Columbus, 1868. Broadside membership certificate, printed in blue typescript and completed in manuscript, with attractive illustration of American Flag and Screaming Eagle. Alexander McCoy is elected "an HONORARY MEMBER of the WHITE BOYS IN BLUE OF COLUMBUS, OHIO." He is thus expected "to subscribe to such principles as adopted in our Constitution and By-Laws." Dated in manuscript December 1, 1868; signed in ink by the Colonel Commanding [Isaac H. Marrow, a veteran of the 3d Ohio Infantry], the Adjutant [J.N. Miller], and the Secretary [H.J. Feltus, who served in several Indiana regiments]. Expert reinforcement on blank verso to horizontal folds. Decorative border. Very Good.

The 'White Boys in Blue,' a post-Civil war organization composed of former Union soldiers, favored the anti-Black Reconstruction policies of President Andrew Johnson. Its adherents supported the Seymour-Blair 1868 presidential ticket, opposed the Republican Party, and objected to Congressional Reconstruction. It was especially active in Indiana and Ohio.
"Its influence is pernicious, and its designs are believed to be to restore rebels to power and demand for the South full reparation for all damages occasioned by the war, and if it can, to compel the nation to pay the rebel debt, but first to repudiate our own national debt. It invites to its membership all soldiers opposed to the National Congress and the lawful government of the United States... They embellish the dogmas with extenuations and justifications for the 'lost cause,' and justify the barbarous cruelties of Andersonville prison pen." [Wilson, THE GRAND ARMY OF THE REPUBLIC UNDER ITS FIRST CONSTITUTION AND RITUAL. ITS BIRTH AND ORGANIZATION 141. Kansas City: 1905].
Not located at the online sites of OCLC, AAS, Boston Athenaeum, NYPL, Harvard, Yale as of November 2020. (Inventory #: 33884)
$750.00 add to cart or Buy Direct from
David M. Lesser, Fine Antiquarian
Share this item
David M. Lesser, Fine Antiquarian Books LLC
Offered by