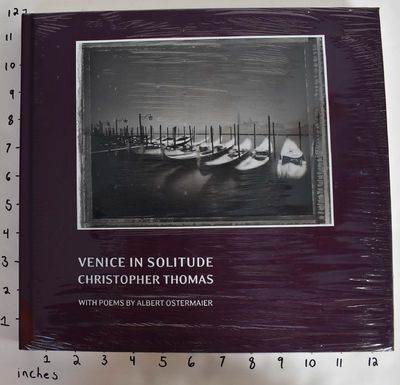 by Stehmann, Ira and Albert Ostermaier
New York: Prestel, 2012. Hardcover. New; in shrink wrap.. Plum linen/boards; bw photo and white lettering. 160 pp. with 80 bw images. From lonely, rain-swept piazzas to silent rows of empty gondolas, one of the world's busiest and most beautiful cities lies frozen in time in this stunningly illustrated book that captures the city without people. Whether you're a first-time tourist or seasoned traveler, it's virtually impossible to find yourself alone in Venice. The city's many architectural splendors, its winding canals, ancient piazzas and charming markets are marvelous to visit-and crowded with people in every season. In these hauntingly beautiful photographs, Christopher Thomas takes readers on a solitary tour of the city Lord Byron once called "the Most Serene Republic." As he did with his previous volume, New York Sleeps, Thomas uses long-term exposures and a now discontinued large-format Polaroid film to capture places bereft of humans in the early hours of the day. Readers can almost feel the ghosts of Titian, Shakespeare, Vivaldi, and Henry James wandering these canals and cobblestones; and they can experience the city as it was intended to be: an ingeniously planned, aesthetically delightful oasis of beauty, light, shadows-and serenity. Set to the poems of Albert Ostermaier. (Inventory #: 162671)
$50.00 add to cart or Buy Direct from Mullen Books
Share this item