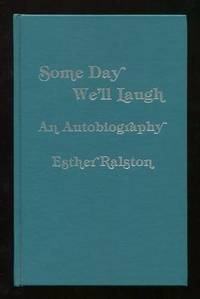 by Ralston, Esther
Metuchen NJ/London: The Scarecrow Press. Fine. 1985. First Edition. Hardcover. 0-8108-1814-0 . (no dust jacket, as issued) [nice clean copy, with no discernible wear; appears unread]. (Filmmakers, No. 11) Series (B&W photographs) SIGNED by the author, with a brief inscription, beneath her frontispiece portrait photo. "One of the top contract players at Paramount in the Twenties, Esther Ralston brought considerable elegance and grace to such productions as PETER PAN, BEGGAR ON HORSEBACK, A KISS FOR CINDERELLA, OLD IRONSIDES and THE CASE OF LENA SMITH. All of those films are discussed here, as is her childhood, when she worked on stage with her family, billed as 'Baby Esther, America's Youngest Juliet'; her first entry into films as an extra in the mid 'teens; and her working relationship with such colorful characters as Dorothy Arzner, Herbert Brenon, Gary Cooper, and Josef von Sternberg." Signed by Author . (Inventory #: 23438)
$60.00 add to cart Available from ReadInk
Share this item
ReadInk
Offered by