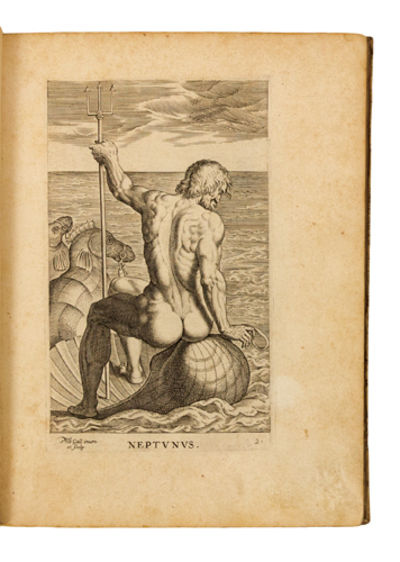 by GALLE, Philippe; PHILIPPE GALLE
1586. GALLE, Philippe. Semideorum marinorum amnicorumque sigillariae imagines perelegantes in picturae statuariaeque artis tyronum usum a Philippo Gallaeo delineatae, sculptae et aeditae. Engraved title-page followed by 17 numbered engraved plates. Antwerp: [Galle], 1586. BOUND WITH: Nimpharum oceanitidum, ephydridum potamidum, naiadum, lynadumque icones, in gratiam picturae studiosae ivventutis deliniatae scalptae, et editae a Phillip. Gallaeo. Engraved title-page followed by 17 numbered engraved plates. Small 4to., 219 x 165 mm, bound in contemporary Flemish vellum, with title in manuscript on the spine. Preserved in a green half morocco folding box. Antwerp: [Galle], 1587. First Editions of both sets of prints, designed and meticulously executed by Philipp Galle, one of the foremost Flemish engravers of the day. These allegorical depictions of classical water deities and personifications of European waterways set male and then female figures among their appropriate geographical environment. The settings often include topographical or mythological iconography (i.e. Nilus, or the Nile shows a pyramid and obelisk in the background or Lerna with its Hydra in the distance), however it is undoubtedly the figures themselves that are of most interest to the artist. They clearly show the influences of High Renaissance Italy, with the musculature of the male figures evoking Michelangelo and the elongation of the female figures reminiscent of Parmigiano's Madonnas. Philippe Galle (1537-1612) ranks among his peers, Johannes Stradanus (1523-1605), Martin de Vos (1532-1603), Adriaen Collaert (1560-1618), and Maarten van Heemskerck (1498-1574), as being known for introducing Italian art into the Northern Netherlands and influential on Dutch artists of the great period of pictorial art, the Dutch Golden Age, in the following century. Both sets of prints are rare. We locate a copy of both at the National Gallery, a complete copy of just Semideorum marinorum at the Bibliotheque Nationale, and a selection of odd plates at the Metropolitan Museum of Art and British Library. A very desirable copy, bound in an un-restored, contemporary vellum binding with nice impressions of the plates and wide margins. Some insignificant soiling or spotting. Brief early manuscript notes on the verso of seven plates. (Inventory #: 164842)
$18,500.00 add to cart or Buy Direct from
Ursus Rare Books
Share this item
Ursus Rare Books
Offered by