NOTES ON THE STATE OF VIRGINIA. WITH AN APPENDIX 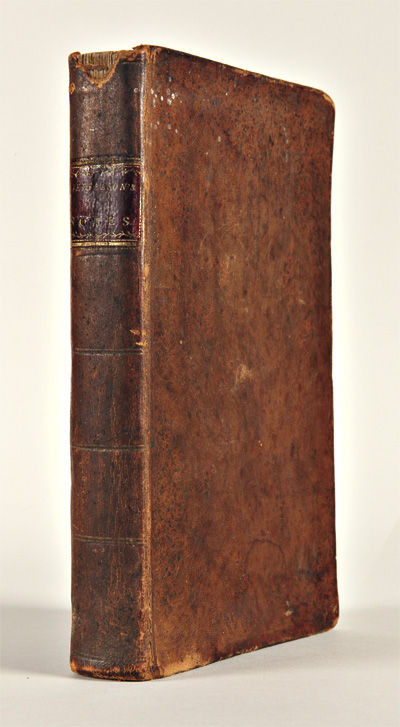 by Jefferson, Thoma
Newark: Printed by Pennington & Goul, 1801. 392pp., plus frontispiece portrait and folding table. Contemporary speckled calf, spine gilt, leather label. Hinges rubbed, head of spine chipped, moderate edge wear. Light tanning and foxing. Good plus. The self-styled "third American edition," and the first printing in New Jersey. NOTES ON THE STATE OF VIRGINIA is the only book-length work by Jefferson to be published in his lifetime. It has been called "one of America's first permanent literary and intellectual landmarks." It was largely written in 1781 and first published in Paris, in French, in 1785. Written in the form of answers to questions about Virginia, the book supplies a description of the geography, with an abundance of supporting material and unusual information. The portrait of Jefferson was engraved by John Scoles, and is pictured and described in Cunningham's THE IMAGE OF THOMAS JEFFERSON IN THE PUBLIC EYE.... "This edition is one of three editions printed the same year from the same type, with reimposed first signatures and changed title pages and imprints. Aside from the text of the appendix concerning the Logan- Cresap incident, which is from the appendix first published in 1800, it would appear that the type was set from an uncorrected copy of the Mathew Carey edition of 1794" - Felcone. This edition was issued without the map and the folding plate of the Natural Bridge, but contains the appendix on the murder of Logan, as with first New York edition of 1801, to which it corresponds.

A quite unusual imprint of Jefferson's NOTES, and the first copy of this edition to be handled by this firm. FELCONE COLLECTION 803. ADAMS, THE EYE OF THOMAS JEFFERSON 57. HOWES J78. SABIN 35902. SHAW & SHOEMAKER 721. REESE, FEDERAL HUNDRED 6 (ref). Coolie Werner, "A Further Checklist of the Separate Editions of Jefferson's 'Notes on the State of Virginia" (Charlottesville, 1960), p. 15. (Inventory #: WRCAM53407)
$3,000.00 add to cart or Buy Direct from
William Reese Co. - Americana
Share this item