THE EARLY DAYS AND MEN OF CALIFORNIA 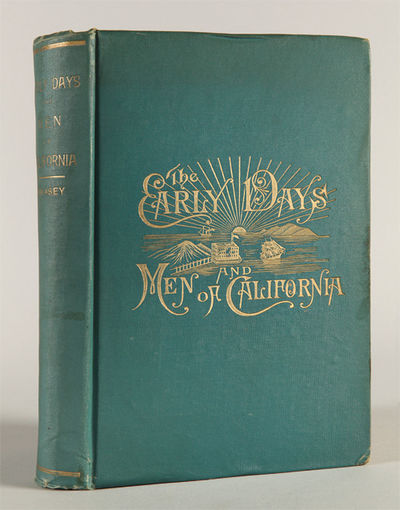 by Swasey, W.F.
Oaklan, 1891. x,[9-]406pp. plus frontispiece and three plates. Original blue cloth, stamped in gilt. Light soiling and wear, corners bumped. Internally clean. Very good. The author arrived in California in 1845, employed by Captain Sutter and by American Consul Thomas O. Larkin in Monterey. Swasey also took part in Fremont's march to Los Angeles. A classic collection of early California pioneer biographies combined with a reliable firsthand source of events in San Francisco before the Gold Rush: "It should be borne in mind by the reader that the immigrants, previous to the discovery of gold, were composed of a class of men who were in the full vigor of early manhood, imbued with a spirit of adventure in its highest sense, and backed by intelligence and supreme self-reliance." "The book has always been considered an authority" - ZAMORANO 80. "[Swasey] wrote easily, and his work forms a reliable picture of the men and events of the early days, more especially of San Francisco" - Cowan. HOWES S1167, "aa." COWAN, p.627. STREETER SALE 3012. GRAFF 4047. KURUTZ 615. ZAMORANO 80, 72. (Inventory #: WRCAM51853)
$1,250.00 add to cart or Buy Direct from
William Reese Co. - Americana
Share this item