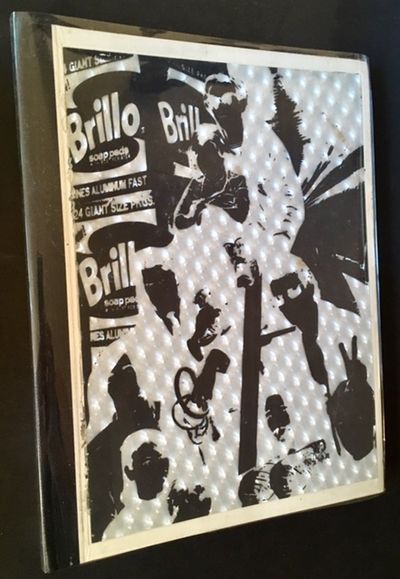 by Andy Warhol
New York: Random House, 1967. Hardcover. Near Fine. A handsome copy of the 1967 stated 1st printing of this seminal artist's book, cited by both Andrew Roth and Martin Parr as among the most influential photo/artists' books of the century. This copy boasts a very bright front cover (with crisp, completely unflecked silver lettering along the spine) and is missing only 1 of its 10 original multiples/objects. Included are: the castle pop-up; the red accordion (which still squeaks somewhat); the bi-plane pop-up; "The Chelsea Girls" paper wheel (attached); the Velvet Underground/Lou Reed record (attached); the double-image rainbow nose; the Hunt's Tomato Paste pop-up; the rectanguale tear-offs (missing only 1 of the 8); and the balloon (inevitably smushed down, as in virtually every copy). The only missing piece is: the 12-sided "sphere", even though the original string to which is was attached is still present. Respectable and very solid, and in the much less common hardback. Tight and VG+, with very light soiling to the rear panel. (From the title page: "with the assistance of Stephen Shore, Paul Morrissey, Ondine, Nico -- several photographs by Nat Finkelstein, Factory Fotos by Billy Name"). (Inventory #: 14349)
$750.00 add to cart or Buy Direct from Appledore Books
Share this item
Appledore Books
Offered by