So much of the diary of Lady Willoughby as relates to her domestic history, & to the eventful period of the reign of Charles the First. 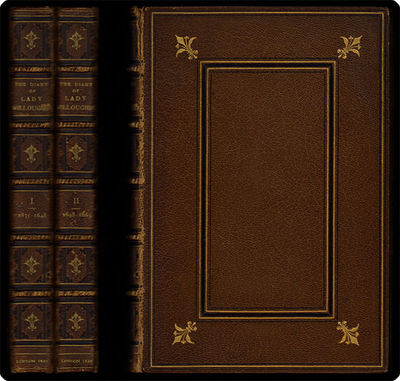 [with the same author's] Some further portions of the diary of Lady Willoughby which do relate to her domestic history and to the events of the latter years of the reign of King Charles the First, the Protectorate and the Restoration. London: Longman, Brown, Green, & Longmans, 1848. 12mo. [6], 215, [1] pp.
As per the "Address to the Reader" of So Much of the Diary, etc. "the style of Printing and general appearance of this Volume have been adopted by the Publishers merely to be in accordance with the design of the Author, who in this Work personates a lady of the seventeenth Century" — with "personat[ing]" being the key word, as this is => the diary of a real 17th-century woman as imagined, both deeply and extensively, by a Victorian woman who had immersed herself in the history and memoirs of the "diarist's" period. Published anonymously, it was on its first appearance often sincerely attributed to Elizabeth Cecil Willoughby, Baroness Willoughby (1606–61), perhaps helped on by the fact that Longman had gone so far as to commission a new font from => the Chiswick Press, a recasting of Caslon Old Face, with "antique" headpieces and decorative woodcut initials, pages framed in double-ruled borders, and up-front woodcut coats of arms further employed to enhance the "journal's" verisimilitude. According to the DNB (online), the publication "fostered a minor vogue for first-person historical narratives in contemporary typefaces, notably Anne Manning's 1850 account of Mary Powell (Milton's first wife), and Thackeray's Henry Esmond (1852)."
Lady Willoughby's husband, Francis Willoughby, was a political intriguer who originally opposed the King, but later fell out with the Parliamentarians and joined the Royalists, fleeing to the Caribbean where he eventually became Governor of Barbados and established the short-lived colony of Willoughbyland (in what is now Suriname) before being restored to his estates in England. The diary entries attributed to his wife, which end shortly before Willoughby's departure for the islands, describe the major political and military events of the day against a background of her concern for her children, her love of her mother and husband, and her piety and devotion. Rathbone paid enough attention to detail to have "Lady Willoughby" offer a recipe against giddiness "given to mee by Mr. Gerard's Aunte" — the recipe being quoted in full directly from John Gerard's Herball of 1597 — but altered the course of historical events very slightly by extending the life of her daughter Diana about six years past her actual death and increasing the number of her deceased children!
So Much of the Diary, here in its 1845 second edition, was originally printed in 1844, while Some Further Portions is here in its first printing.
Binding: Contemporary => matched bindings done by Zaehnsdorf, signed on each front turn-in: brown morocco, framed and panelled in gilt and black fillets with gilt-stamped fleur-de-lis corner fleurons, turn-ins similarly designed, and board edges with gilt roll; spines with gilt-stamped titles and volume labels, blind-stamped compartment decorations, and gilt-stamped fleurs-de-lis in compartments. Top edges gilt. Back pastedown of each volume with gilt-stamped example of Zaehnsdorf's oval medieval bookbinding apprentice device, from a design by Jost Amman.
Provenance: Front fly-leaf of second volume with a woman's tantalizingly not-quite-decipherable ownership inscription: "E[something] Anne Fan[something!]s [/] Farnley 1848." Most recently in the library of American collector Albert A. Howard, small booklabel ("AHA") at rear.

NSTC 2R2740 & 2R2743; Ing, Charles Whittingham: Printer, 1795-1876, 32. Bindings as above, variously rubbed to extremities; offsetting to endpapers from turn-ins. Vol. II with ownership inscription as above. Pages lightly age-toned with occasional minor smudges or spots; front fly-leaf of vol. II (only) more notably spotted. => A handsome set of an intriguing Victorian — and feminine — perspective on the domestic side of this dramatic period in the 17th century. (Inventory #: 37855)
$500.00 add to cart Available from
Philadelphia Rare Books & Mss.
Share this item

Chicago : Laird & Lee , (1900)
(click for more details about Fireside battles.)
View all from this seller>