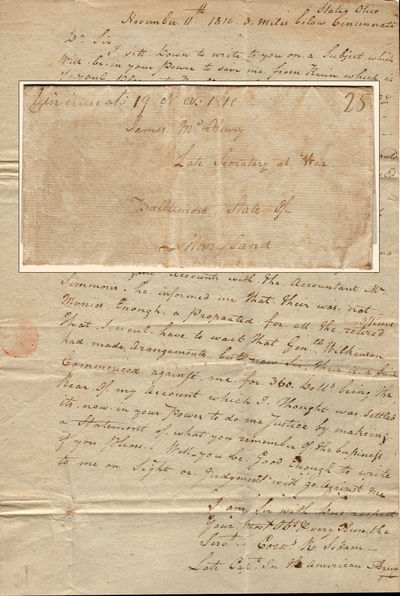 by Captain Cornelius R. Sedam
Cincinnati, 1810. Unbound. Very good. This stampless one-page folded letter measures 15.5" x 12.5" unfolded. It was sent from Sedam's farm near Bold Face Creek about three miles west of Cincinnati and is dated November 11, 1810. The cover is addressed to McHenry at Baltimore, Maryland. It has a manuscript Cincinnati postmark dated 19 Nov 1810. A manuscript "25" appears in the upper right corner indicating the cost to send a letter a distance of 500 or more miles. The letter is in nice shape with some light soiling.

In this letter, Sedam, asks for McHenry's assistance in obtaining a retiree emolument which he had been promised when the army was downsized in the late 1790s after the Northwest Territory had been secured. "I . . . write you . . . to save me from Ruin. . . . if you'll please to Recollect when you was Secretary of War you Granted me permission to go to the West Indies and hold my Commission [and] that their would be a Reduction of the Army and would be some Emollements for the Officers that would Retire. Accordingly, I did when . . . the Reduction Took Place. [After] I left Service and Captain Shamburg remained in my Sted . . . the Accountant Mr. Simmons, he informed me that their was not monies Enough apropriated for all the retired Officers. . . . Sir there is a Line commenced against me for 360 Doll's . . . its now in your Power to do me Justice by makeing a Statement of what you remember of the business. . . .". Sedam was a 21-year military veteran and a member of the Society of the Cincinnati. He enlisted in the New Jersey Militia in 1775 and served throughout the Revolution. Following the war, Sadam received a Regular Army commission as an Ensign under General Josiah Harmar and was assigned first to Fort Harmar, where he served with future President William Henry Harrison, and later to Fort Washington (Cincinnati) which he helped build.

Between 1785 and 1795, Sedam fought in the Northwest Indian War. He was one of the few officers to survive St. Claire's massacre at the Wabash and was promoted to Captain in part because of his valorous conduct during the battle. He later fought in General Anthony Wayne's decisive victory at the Battle of Fallen Timbers which secured the Northwest Territory from Indian attacks and forced the British to abandon their forts in the United States

The date of Sedam's "retirement" from the Army is hazy, and it is unclear whether or not he actually traveled to the West Indies. However, it is certain that by 1800, Sedam had established a large farm just west of the then young city of Cincinnati.

Today, Sedamsville, the site of the Sedam homestead, is best known as the childhood home of baseball legend Pete Rose.

A unique letter with a rare early manuscript Cincinnati postmark from a noteworthy, but now all-but-forgotten, soldier who was instrumental in pacifying the Northwest Territory for white settlers. (Inventory #: 008893)
$750.00 add to cart or Buy Direct from
Read'Em Again Books and Paper
Share this item