The Life and Public Services of Henry Wilson, Late Vice-President of the United States 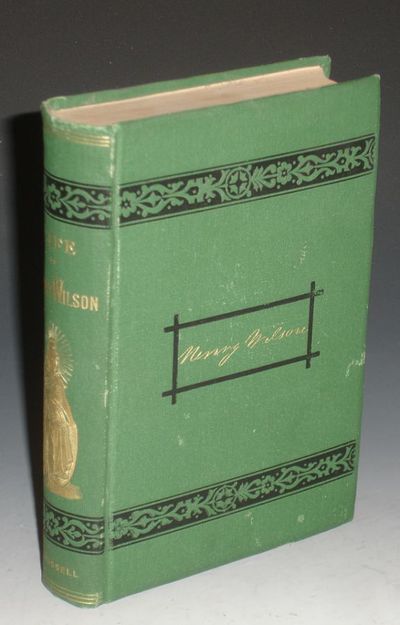 by Nason, Elias; Thomas Russell
Boston: B.B. Russell, 1876. Small Octavo. 452 pages, portrait frontispiece, illustrations. He overcame a childhood of abject poverty and after becoming economically independent championed the abolition of slavery, workers rights for both blacks and whites, as well as other controversial issues but after being one of the founders of the Free Soil Party, he organized a Union regiment and assisted Abraham Lincoln in oversight of the Union Army. He authored bills outlawing slavery. When U.S. Grant ran for President in 1872, he was selected as Vice-President. He served as Vice-President from March 4, 1873 to his death on November 22, 1875 following a debilitating stroke. A very nice biography of a virtually unknown key political figure in the period just before and after the Civil War. Bound in green cloth over beveled boards lettered and decorated in black and gilt, pictorial gilt spine lettered and decorated in black and gilt, previous owner's name James P. Weston, a known artist, dated Jan. 1st, 1876. Some rubbing to cloth, s small area to bottom edge of upper board with wear through. A very handsome copy. (Inventory #: 025366)
$45.00 add to cart or Buy Direct from
ALCUIN BOOKS, ABAA
Share this item

Austin : Texas Folk-Lore Society , 1943
(click for more details about A Tenderfoot Kid on Gyp Water (introduction By J. Frank Dobie))
View all from this seller>