A Voice from Waterloo; a History of the Battle; Fought on the 18th of June 1815, with a Selection from the Wellington Dispatches 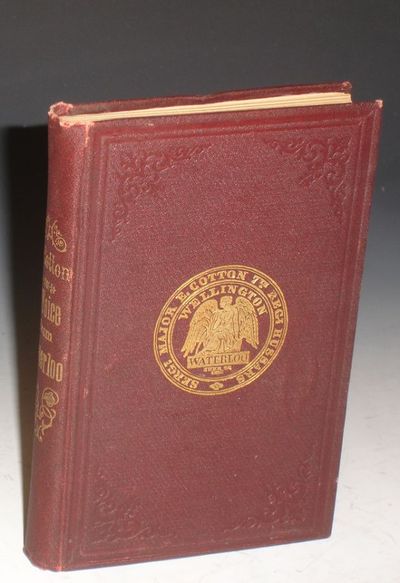 by Cotton, (Sergeant-Major) Edward (7th Hussars)
Brussels: Kierssling and Co, 1895. 12mo. 297pp, [4]. 15[1]pp. 8th revised and enlarged edition, [8] leaves of plates (two folded), illustrations (some in color), maps. Includes the rare errata slip which corrects where the two troops were in the center (a minor point but important for exact study of the battle). In spite of the British victory, the casualties were appalling. After every local house was mobilized to house the severely wounded, even stables were used as both surgeons and untrained performed amputations day and night. Sir Charles Bell provided rather ghastly color images in another volume on the horrendous condition of the wounded most of whom died within days. After Cotton's death, his nieces ran the museum on the premises of the battle and sold this book which notes on the first free endpaper "To Florence Harris, July 11, 1900, Waterloo, Belgium--bought on the battlefield." Bound in brown embossed cloth centrally stamped in gilt, spine lettered and decorated in gilt, minor light wear to sine ends, near fine. (Inventory #: 025370)
$115.00 add to cart or Buy Direct from
ALCUIN BOOKS, ABAA
Share this item

An Account of the Manners and Customs of the Modern Egyptians : written in Egypt During the Years 1833-1835

London : Ward, Lock and Co , 1842
(click for more details about An Account of the Manners and Customs of the Modern Egyptians : written in Egypt During the Years 1833-1835)

London : A. Millar , 1755
(click for more details about The Dramatic Works of Henry Fielding (3 voluimes))
View all from this seller>