Is Davis a Traitor; or, Was Secession a Constitutional right Previous to the War of 1861 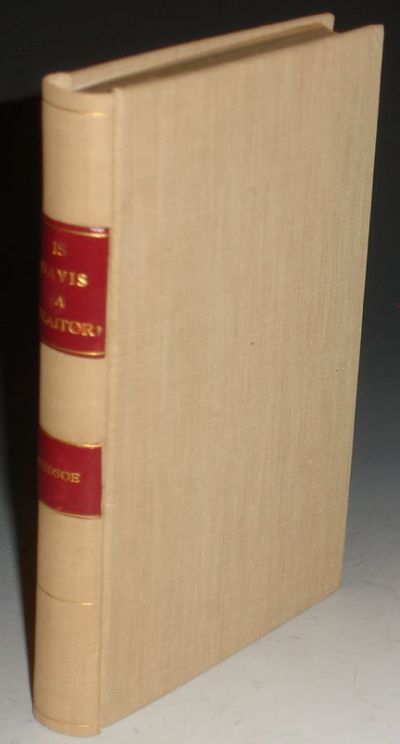 by Bledsoe, Albert Taylor, 1809-1877
Baltimore: Printed for the Author By Innes & Company, 1866. First Edition. Small Octavo. vi, 263 pages. Bledsoe was in the vanguard of the "Lost Cause" theory of southern history. His work is still the most closely argued among the other two important writers Alexander Stephens and Jefferson Davis's massive work in 1881. He knew Jeff David, R.E. Lee at West Point, practiced before the Illinois Supreme Court where he came to know Lincoln and Stephen Douglas (later he was to imply Lincoln was always on the make for political power). During the Civil War, Jefferson Davis sent him to England in 1864 to purchase library books justifying secession and slavery (clearly Davis did not see the writing on the wall). In his introduction he notes that the purpose of the work was to prove "the right of secession" and to wipe off the charges of treason against the names and memories of Jefferson David, Stonewall Jackson, Robert E. Lee and others. He argues that they were perfectly loyal to truth, justice and the Constitution of 1787 as it came from the hands of the fathers. The scarce work was reprinted later in 1907 but first editions are rate. This work was professionally rebound in beige, double red leather spine labels gilt, endpapers renewed, some toning to outer margins, a very good copy. [Nevins, II, p. 169]. (Inventory #: 025361)
$550.00 add to cart or Buy Direct from
ALCUIN BOOKS, ABAA
Share this item

General Crook and the Apache Wars

The Poems of Ernest Dowson

London : John Lane, the Bodley Head , 1911
(click for more details about The Poems of Ernest Dowson)
View all from this seller>