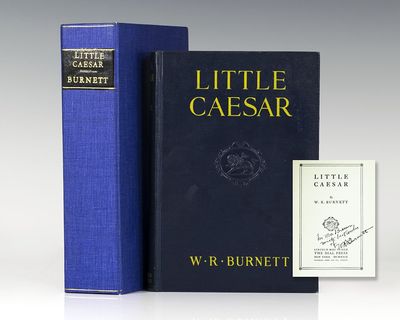 by Burnett, W.R
New York: Lincoln MacVeagh/ The Dial Press, 1929. First edition of Burnett's classic novel, which has inspired generations of gangster films. Octavo, original cloth. Inscribed by the author on the title page, "For Mrs. Brown with best wishes of W.R. Burnett." In near fine condition with light rubbing, clipping of a picture of the author and his wife to the front free endpaper. Housed in a custom clamshell box. First editions of Little Caesar signed and inscribed are rare. Little Caesar was the basis for the 1929 film bearing the same name directed by Mervyn LeRoy, and starring Edward G. Robinson, Glenda Farrell, and Douglas Fairbanks Jr. It was Robinson's breakthrough role and immediately made him a major film star. It is often listed as one of the first full-fledged gangster films and continues to be well received by critics. (Inventory #: 59019)
$2,500.00 add to cart or Buy Direct from
Raptis Rare Books
Share this item

The Ascent of Everest.

London : Hodder & Houghton , 1953
(click for more details about The Ascent of Everest.)
View all from this seller>