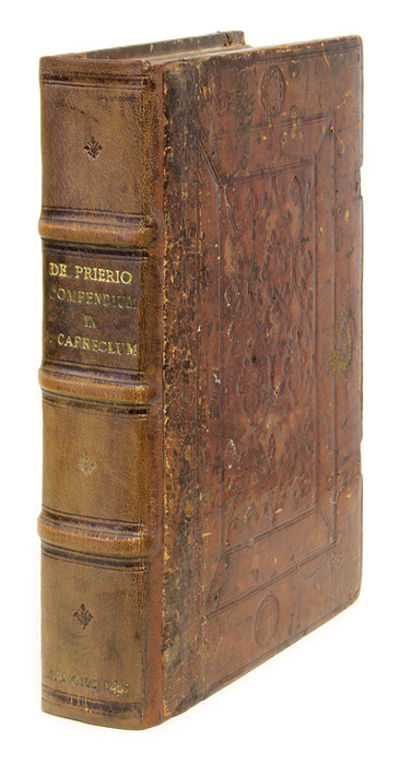 by Mazzolini, Silverstro, Da Prierio; Prieria, Sylves
1497. Cremona: Carolus de Darleriis, 15 and 28 Apr. 1497. Cremona: Carolus de Darleriis, 15 and 28 Apr. 1497. A Powerful Opponent of Martin Luther Mazzolini, Silverstro, Da Prierio [1456-1527]. Compendium in Johannem Capreolum cum Additionibus. [Cremona: Carolus de Darleriis, 15 and 28 April 1497]. [320] ff. Collation: [*4], a-n8, aa-kk8, ll-mm4, A-C8, D6, E4, AA-DD8, EE-GG6, HH4, (1-9)4. Complete. Quarto 9-1/4" x 7" (23 x 18 cm). Contemporary calf with elaborate blind stamping, over wooden boards, rebacked with raised bands, blind ornaments and gilt title, traces of clasps. Light rubbing and minor worming to boards, moderate rubbing to board edges, hinges cracked. 46-line text in parallel columns, extensively rubricated in red, with 8 large 12 line initials in interlocking red and blue with fine purple penwork decoration, other 6 line initials in red. Light toning to text, somewhat heavier in places, early annotations to front pastedown, other annotations and owner signature dated 1606 of Isaias Silberschlag, to title page, occasional annotations in his hand to text. A handsome copy of a rare imprint. $10,000. * First edition. Mazzolini, a theologian and wide-ranging scholar, was an inquisitor and censor of books for Rome. An early opponent of Martin Luther, he was involved in the juridical process against him. (Mazzolini was also involved in cases against Johann Reuchlin, Pietro Pomponazzi and Erasmus). A great deal of his scholarship was devoted to the works of St. Thomas Aquinas. Also known as the Egregium vel Potius Divinum Opus in Iohannem Capreolum, Mazzolini's Compendium is a summary of a work of another Aquinas scholar, Jean Capreolus [c.1380-c.1444] dealing with Aquinas's commentaries on the Libri Quattuor Sententiarum of Peter Lombard [c.1096-1160], one of the great works of Medieval theology. Silberschlag, the former owner of this copy, was a professor of theology at the University of Erfurt. This is a scarce imprint. We located only two auction records for it, one in 1991, the other in 2002. OCLC locates 5 copies in North America (Cornell, Library of Congress, Morgan Library, St. Bonaventure University, Yale). Goff, Incunabula in American Libraries V519. Gesamtkatalog der Wiegendrucke M42160. Incunabula Short-Title Catalogue is00519000. (Inventory #: 67040)
$10,000.00 add to cart or Buy Direct from
Lawbook Exchange
Share this item