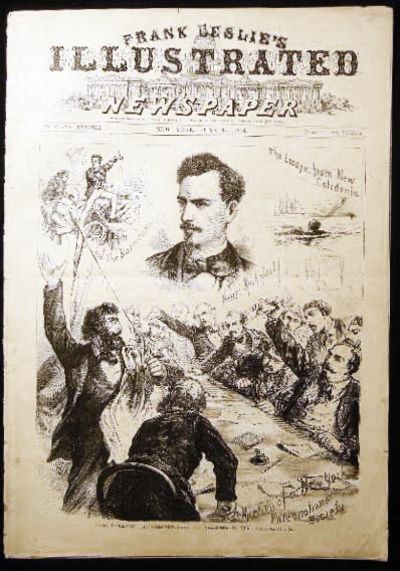 by (Americana - 19th Century - Periodical -Frank Leslie)
New York, NY: Frank Leslie, 1874. (14) pages; illustrated in black and white throughout. Cover pictorial and story within of Henri Rochefort (1830 - 1913) French radical political journalist, news publisher & sometime communist, politician, duelist and anti-Semite; by this point in 1874 his turbulent life had led to his escape from penal servitude in the French colony of New Caledonia where he'd been committed to a life sentence for his various polemics, after which he made his way to the U.S., one his way to returning to Europe, (by 1895) where he eventually "...became a leader of the anti-Dreyfusards, and had a principal share in the organization of the press campaign..." (E.B. 11th ed.) The cover vignettes give portrait of Rochefort, his command 'on the barricades' in France, escape scene, and at a fiery "Meeting of a New York International Society." Other articles within depict steamship travel, booksellers' row State Street in Chicago, the Spanish civil war of the First Republic and other world and national news. Approx. 11" x 16" size; light wear; inner hinge strengthened; disbound from a larger volume; a little edge-wear, closed edge-tear; in very good condition.. Periodical. Not Bound. Good. (Inventory #: 24741)
$45.00 add to cart or Buy Direct from Certain Books
Share this item
Certain Books
Offered by

An Essay on the Causes of the Variety of Complexion and Figure in the Human Species. To Which are Added, Animadversions on Certain Remarks Made on the First Edition of This Essay, By Mr. Charles White...also, Strictures on Lord Kaims' Discourse...

New-Brunswick NJ and New York : J. Simpson and Co. And Williams and Whiting , 1810
(click for more details about An Essay on the Causes of the Variety of Complexion and Figure in the Human Species. To Which are Added, Animadversions on Certain Remarks Made on the First Edition of This Essay, By Mr. Charles White...also, Strictures on Lord Kaims' Discourse...)
View all from this seller>