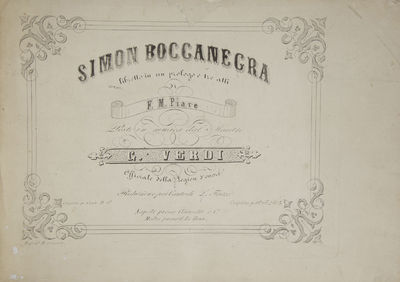 Simon Boccanegra, to a libretto by Francesco Maria Piave after Antonio García Gutiérrez's play Simón Bocanegra, was first performed in Venice at the Teatro La Fenice on March 12, 1857.

"In recent years, audiences have been in no doubt that Simon Boccanegra contains some of the mature Verdi's greatest dramatic music, and there seems little doubt that the opera will retain its new status as one of the composer's most compelling creations." Roger Parker in Grove Music Online. (Inventory #: 26461)
$575.00 add to cart or Buy Direct from
J & J Lubrano Music Antiquarians
Share this item

Autograph letter signed to Hunt B. Jones at Haverford College


(click for more details about Autograph letter signed to Hunt B. Jones at Haverford College)