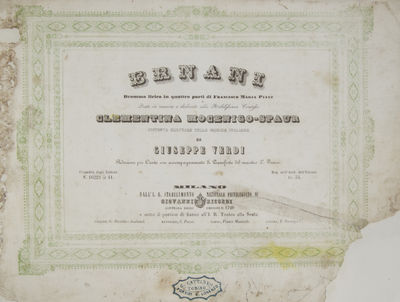 Occasional cuts and annotations in contemporary and modern hands in pencil and black ink.

Ernani, to a libretto by Francesco Maria Piave after Victor Hugo's play Hernani, was first performed in Venice at the Teatro La Fenice on 9 March 1844. The opera "quickly became immensely popular, and was revived countless times during its early years."

"As Verdi himself stated more than once, Ernani represents an important change of direction in his early career. His two earlier successes, Nabucco and I Lombardi, had both been written for La Scala, one of the largest stages in Italy and well suited to the grandiose choral effects of those works. For the more intimate atmosphere of La Fenice, he created an opera that instead concentrated on personal conflict, carefully controlling the complex sequence of actions necessary to bring characters into intense confrontation. This new format brought about a fresh consideration of the fixed forms of Italian opera, in particular an expansion and enrichment of the solo aria and duet, together with a more flexible approach to the musical sequences that bind together lyrical pieces. Most important, however, was Verdi's gathering sense of a musical drama's larger rhetoric, his increasing control over the dynamics of entire acts rather than merely of entire numbers. In this respect, the third act of Ernani sets an imposing standard of coherence, one that is rarely equalled until the operas of the early 1850s." Roger Parker in Grove Music Online. (Inventory #: 25940)
$900.00 add to cart or Buy Direct from
J & J Lubrano Music Antiquarians
Share this item