F. SCOTT FITZGERALD IN MINNESOTA: Toward the Summit 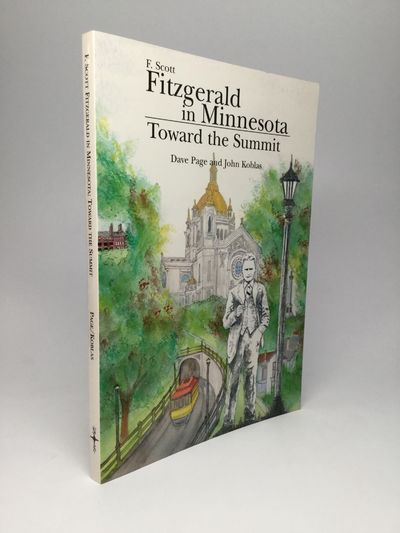 by Page, Dave and John Koblas
St. Cloud, Minnesota: North Star Press of St. Cloud, Inc, 1996. First Edition. Trade paperback. Fine. An exploration and guide to Fitzgerald's association with the North Star State. Fitzgerald was born on September 24, 1896 in St. Paul where two of the four novels released in his lifetime - This Side of Paradise and The Beautiful and Damned - were polished for publication. His third novel, The Great Gatsby, was pitched to his editor, Maxwell Perkins, in a letter written from White Bear Lake, the resort community he frequented as a youth and lived in as a young man. In addition, a score of his best short stories - "The Diamond as Big as the Ritz" and "Winter Dreams" - were penned in Minnesota. Includes a detailed guide and a map of Fitzgerald's Summit Avenue homes and haunts, as well as numerous textual photographs and illustrations. Inscribed by both Page and Koblas on the title page. Original pictorial paper wrappers. A fine copy. (Inventory #: 66143)
$100.00 add to cart or Buy Direct from Johnson
Share this item

SKETCHES OF YOUNG COUPLES; with an Urgent Remonstrance to the Gentlemen of England (Being Bachelors or Widowers), on the Present Alarming Crisis

London : Chapman and Hall , 1840
(click for more details about SKETCHES OF YOUNG COUPLES; with an Urgent Remonstrance to the Gentlemen of England (Being Bachelors or Widowers), on the Present Alarming Crisis)

SITTING ON THE WORLD

New York and London : G.P. Putnam's Sons , 1924
(click for more details about SITTING ON THE WORLD)
View all from this seller>