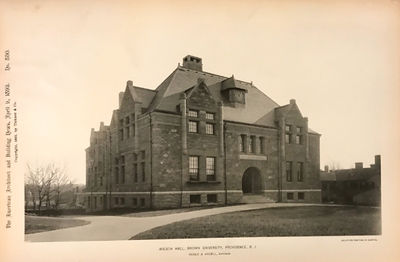 by TICKNOR & CO
Boston: Ticknor & Co, 1892. unbound. Heliotype print. Sheet measures 8.5" x 12.75". This image depicts Wilson Hall of Brown University, a school that rarely surfaces in 19th century printed media. Appearing in the April 9, 1982 issue of 'The American Architect and Building News, the print provides a clear rendering of the newly completed building, which had been dedicated on June 15, 1891. It was designed by Gould and Angell in the Richardsonian Romanesque style, featuring random ashlar sandstone and brownstone trim that appear in fine detail in this heliotype, a type of photomechanical print able to produce a bichromatic effect. It was originally designed for the Physics department, and today is among the most heavily used classroom buildings on campus.The print is in very good condition with no chips or years. Minor toning and foxing in the margins, not affecting the image. Brown University is a private Ivy League research university in Providence, Rhode Island, and was established in 1764, prior to the American Revolution. It is reputed to be one the eccentric and liberal of the Ivies. (Inventory #: 274781)
$200.00 add to cart or Buy Direct from
Argosy Book Store
Share this item