The Colton Letters, The Inside Story of an Infamous Procedure. Huntington's Private Opinion of Senators and Representatives. They are "Good Fellows" When He Can Handle Them' "Agrarians" When He Cannot. Shall the Government Again Be Plundered 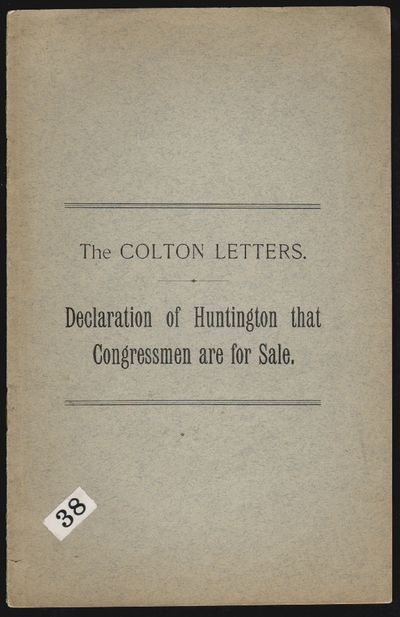 by [RAILROADS, CENTRAL PACIFIC]
Cover title: The Colton Letters. Declaration of Huntington that Congressmen are for Sale. No place or date, but c. 1895. 8vo, 12 pp, stapled wrappers. Mild toning to edges, small sticker on front cover, short closed tears to front wrapper near head and foot of spine; very good. Following a scathing, anonymous introduction, this pamphlet reprints excerpts from private letters from Collis P. Huntington to David Colton, Financial Director of the Central Pacific. The letters -- which became public when Colton's widow produced them in court to support her claim that the "Big Four" were trying to defraud her -- provided clear evidence that Huntington had engaged in a pattern of bribing, deceiving, and manipulating congressmen and otherwise influencing legislation to favor the interests of the Railroad and its promoters. Publication of the letters in the press and in this pamphlet (which was also sent to members of Congress, possibly by San Francisco Mayor Adolph Sutro) significantly damaged the reputation of the Railroad among the public, and helped lead to the defeat of a the Pacific Railroad Funding Bill of 1896. Cowan p. 137. (Inventory #: 19058)
$175.00 add to cart or Buy Direct from Walkabout Books
Share this item

Guy Fawkes, Or, the Gunpowder Treason, A.D. 1605: With a Development of the Principles of the Conspirators, and an Appendix on the Anonymous Letter; also a Facsimile of the Letter and of the Miraculous Straw as Circulated in 1606

London : John W. Parker , 1840
(click for more details about Guy Fawkes, Or, the Gunpowder Treason, A.D. 1605: With a Development of the Principles of the Conspirators, and an Appendix on the Anonymous Letter; also a Facsimile of the Letter and of the Miraculous Straw as Circulated in 1606)
View all from this seller>