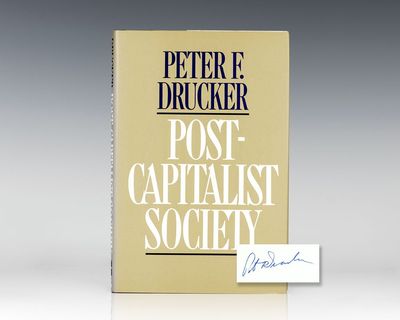 by Drucker, Peter F
New York: Harper Collins, 1993. First edition of one of the final works by "the world's greatest management thinker... deserves to be measured alongside people such as Keynes or Schumpeter" (Economist). Octavo, original half cloth. Signed by Peter Drucker on the front free endpaper. Fine in a near fine price-clipped dust jacket. Jacket design by William Graef. Drucker writes ‘that knowledge has become the resource, rather than a resource is what makes our society 'post-capitalist'. It changes, fundamentally, the structure of society. It creates new social dynamics. It creates new politics’..in a couple of paragraphs, he makes more sense of macro-economic policy than most life-time specialists (Financial Times). (Inventory #: 59047)
$600.00 add to cart or Buy Direct from
Raptis Rare Books
Share this item