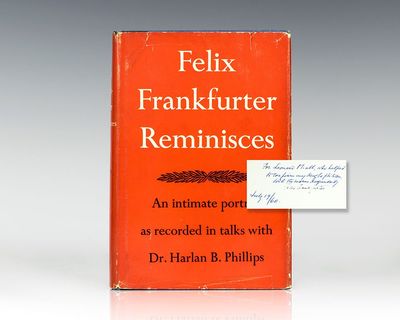 by Frankfurter, Felix
New York: Reynal & Company, 1960. First edition of this collection of thoughts from Supreme Court Justice Felix Frankfurter. Octavo, original cloth. Inscribed by the author on the front free endpaper in the year of publication, "For Leonard Maill, who helped confirm my anglophilism, with the warm regards of Felix Frankfurter July 19, 60." The recipient Rowland Leonard Maill, was a BBC broadcaster and administrator. Bookplate of the recipient. Near fine in a very good dust jacket. Books signed by Frankfurter are rare. Felix Frankfurter was an Austrian-American lawyer, professor, and jurist who served as a Justice of the United States Supreme Court. He graduated from Harvard Law School and was active politically, helping to found the American Civil Liberties Union. He was a friend and adviser of President Franklin D. Roosevelt, who appointed him to the Supreme Court in 1939. Frankfurter served on the Supreme Court for 23 years, and was a noted advocate of judicial restraint in the judgments of the Court. (Inventory #: 59088)
$1,100.00 add to cart or Buy Direct from
Raptis Rare Books
Share this item