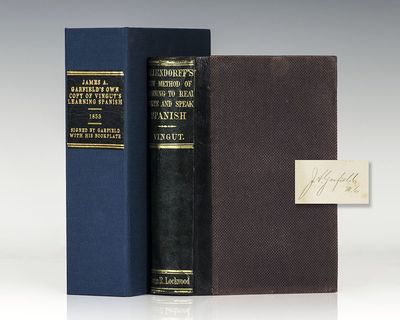 by Ollendorff, Vingut. [James A. Garfield]
New York: George Lockwood, 1853. From the library of President James A. Garfield. Signed on the front free endpaper with the ownership signature, "J. A. Garfield, M.C." Garfield's personal bookplate, "Inter Folia Fructus, Library of James A. Garfield," is on the front pastedown. Housed in a custom cloth clamshell box. Garfield always had a strong interest in languages and scholarship. After graduating from Williams College in 1856, he returned to Hiram College--where he began his education--as professor of ancient languages. In 1857 he was named president of the school. It is likely that this particular book came into his possession during this time. (Inventory #: 58003)
$3,200.00 add to cart or Buy Direct from
Raptis Rare Books
Share this item

New York : Prentice-Hall , 1952
(click for more details about The Power of Positive Thinking.)

New York : William Morrow and Company , 1984
(click for more details about Ramona Forever.)
View all from this seller>