The Works of Charles Lamb. 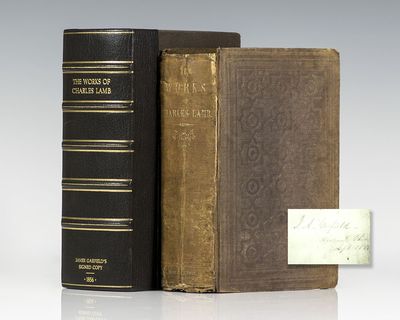 by Garfield, James A. [Charles Lamb]
New York: Derby & Jackson, 1856. Signed on the first free end page in pencil with his ownership signature, "J. A. Garfield, Hiram, Ohio, Sept. 1856." Garfield's personal bookplate, "Inter Folia Fructus, Library of James A. Garfield," is affixed to the front pastedown. Housed in a custom half morocco chemise case. Rare and desirable, from the library of the 20th President of the United States. At Geauga Academy, which he attended from 1848 to 1850, Garfield learned academic subjects he had not previously had time for. He shone as a student, and was especially interested in languages and elocution. Later, Garfield graduated from Williams College in August 1856 as salutatorian, giving an address at the commencement. Garfield biographer Ira Rutkow pointed out that the future president's years at Williams gave Garfield the opportunity to know and respect those of different social backgrounds, and despite his origin as an unsophisticated Westerner, he was liked and respected by socially conscious New Englanders. "In short", as Rutkow later wrote, "Garfield had an extensive and positive first experience with the world outside the Western Reserve of Ohio." On his return to Ohio, the degree from a prestigious Eastern school made Garfield a man of distinction. He returned to Hiram to teach at the Institute, and in 1857 was made its president. He did not see education as a field that would realize his full potential. At Williams, he had become more politically aware in the intensely anti-slavery atmosphere of the Massachusetts school, and began to consider politics as a career. (Inventory #: 58090)
$3,000.00 add to cart or Buy Direct from
Raptis Rare Books
Share this item