BELOVED INFIDEL: The Education of a Woman 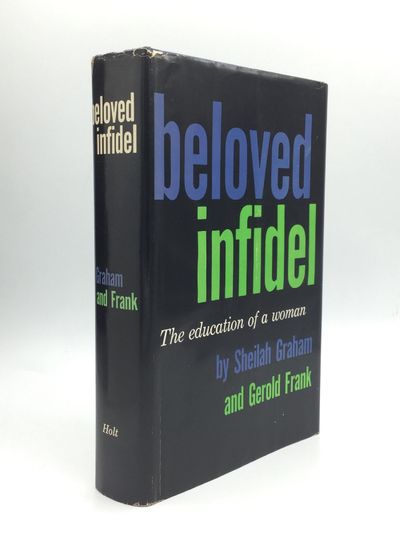 by Graham, Sheilah and Gerold Frank
New York: Henry Holt and Company, 1958. First Edition. Hardcover. Near fine/Very good. The first of three memoirs Graham (1904-88) about her intimate relationship with F. Scott Fitzgerald during the last years of his life. The legendary writer died at age 44 in Graham's Hollywood apartment. Includes ten photographs and illustrations. This copy is inscribed by Graham to Nicholas Patrick Beck, a noted Fitzgerald collector and scholar, who was also a journalism professor at California State University, Los Angeles. Accompanied by a signed photograph of Sheilah Graham with her infant daughter Wendy and two holographic letters from Graham to Beck. In the first, a 1987 holiday card, Graham thanks Beck for "the tapes" and alludes to problems with a producer: "Sidney Skolsky said after he was gyped by the producer - Sidney Buchman on 'The Jolson Story' - God and one other will take care of him. They did - poor Sidney [Buchman] branded as a communist, which I think he was, was ruined." In the other, dated the following year, she informs Beck that she is leaving Palm Beach for New York, where she was scheduled to have leg surgery. She died in November of that year. Octavo. Original black cloth over blue cloth binding, with black and green titles. The dust jacket is price-clipped, with some very mild edgewear. (Inventory #: 66173)
$500.00 add to cart or Buy Direct from Johnson
Share this item

A HIGH WIND IN JAMAICA

London : Chatto & Windus , 1929
(click for more details about A HIGH WIND IN JAMAICA)

New York : Farrar & Rinehart , 1934
(click for more details about JIG SAW: A Comedy)
View all from this seller>