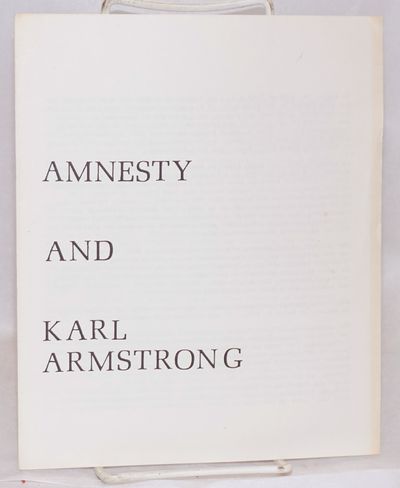 San Francisco: Campaign for Amnesty, 1973. Four-panel brochure, 7x8.5 inches, very good. Article reprinted from Winter Soldier on the case of Armstrong, one of the four bombers who attempted to destroy the Army Math Research Center in Sterling Hall on the University of Wisconsin, Madison campus on August 24, 1970 as a protest against the Vietnam War. The bomb, which went off in the early morning, killed one researcher. Armstrong went into hiding but was caught in Toronto in 1972. Solicits funds for his legal defense. (Inventory #: 217773)
$15.00 add to cart or Buy Direct from Bolerium Books
Share this item