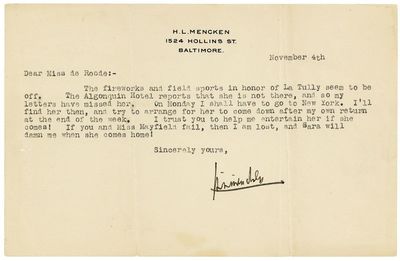 by MENCKEN, H.L.
Baltimore & New York, 1937. The collection is comprised as follows:

4. Typed note signed on green American Mercury letterhead dated New York, November 9th, consisting of nine lines of text. Previous fold, minor creasing with small loss to bottom edge not affecting text, else Very Good. In September, 1927, the writer Sara Haardt (the future Mrs. H.L. Mencken) arrived in Hollywood with a letter of introduction from Mencken to Jim Tully asking that Tully act as Haardt's chaperon during her visit. While in Hollywood Haardt would meet Tully's second wife Marna (née Myers), who, in November that year, made the trip to Baltimore where Mencken expected to meet her. As the four pieces of correspondence detail, twenty-three-year old Marna was a rather elusive guest. In the first letter Mencken instructs "Miss de Roode," "she [Mrs. Tully] should be here either tomorrow (Friday) or Sunday. She must be fed beautifully while she is here, and I hope I can count on you, as a Christian woman, to come along..." The following day he writes: "The fireworks and field sports in honor of La Tully seem to be off. The Algonquin Hotel reports that she is not there, and so my letters have missed her..." On November 7th Mencken was due to travel to New York where "[I] shall try to find Mrs. Tully. Where she is I don't know. But my spies should unearth her..." Finally, the suspense dissolves with the last letter, of November 9th: "It turns out that Mrs. Tully is staying at the Ansonia Hotel...She had lunch with me yesterday." Though Mencken does not expand on this meeting, Paul J. Bauer and Mark Dawidziak write in their biography of Jim Tully: "Those who met her [Marna], from H.L. Mencken to George Bernard Shaw, were invariably charmed" (Bauer and Dawidziak, Jim Tully: American Writer, Irish Rover, Hollywood Brawler (2011), p. 155). (Inventory #: 31107)
$1,500.00 add to cart or Buy Direct from
Lorne Bair Rare Books
Share this item

From Bishop to Witch: The System of the Sacred in Early Modern Terra d'Otranto

Manchester : Manchester University Press , 1992
(click for more details about From Bishop to Witch: The System of the Sacred in Early Modern Terra d'Otranto)

London : Martin Secker , 1934
(click for more details about Selected Poems)
View all from this seller>