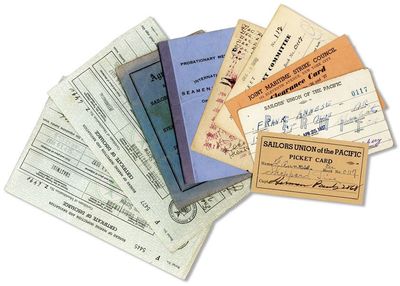 by [INTERNATIONAL SEAMEN'S UNION OF AMERICA] ANNESE, Frank
San Francisco & New York, 1937-1938. Professional archive of a "Probationary Member" of the ISUA from 1937 to 1938, comprised of nine printed pieces, nearly all accomplished in manuscript or rubberstamp. Some old folds to the two discharge certificates, minor wear from handling, else a Very Good or better collection. Contents as follows:

3. Sailors' Union of the Pacific strike assessment card printed on white card stock and accomplished in manuscript and rubberstamp.

4. Meal Ticket issued by the Joint Picket Committee accomplished in manuscript and rubbestamps; includes 6 tiny hole-punches issued at times of use.

5. Sailors Union of the Pacific Picket Card printed on brown stock and accomplished in manuscript. Locates Annese as working on the Sheppard Line.

7. Agreement Between the Sailors' Union of the Pacific and Steampship Companies in the Intercoastal and Offshore Trade and the Alaska Line. Dated: Feb. 4, 1937 [cover title]. 32mo (14cm.); blue printed staplebound wrappers; 21pp.

8. Two Bureau of Marine Inspection and Navigation Certificates of Discharge, both signed by Master of the Vessel, the "Eleanor Christenson," H. Warrer. (Inventory #: 31650)
$125.00 add to cart or Buy Direct from
Lorne Bair Rare Books
Share this item