Sabotage: Its History, Philosophy, & Function [Together With] Original Cover Artwork 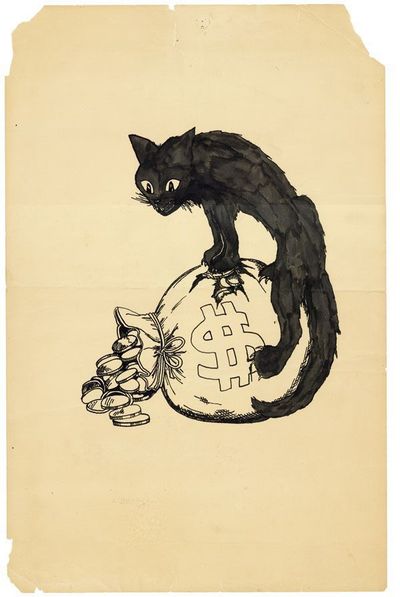 by [ANARCHISTS & THE I.W.W. - GRAPHICS] SMITH, Walker C.; Ralph Chaplin (attributed)
[Chicago: I.W.W. Publishing Bureau, n.d. but 1913]. Reprint (1917). 12mo (17cm.); original drab pictorial staplebound card wrappers; 32pp. Wrappers separated and staples cleanly removed; still, a Good, complete copy of a very uncommon pamphlet. Accompanied by the original cover artwork (43x27.75cm.), black ink on cream stock, several losses and a few closed tears to margins, none approaching image, old vertical fold line, stock rather brittle from age and poor quality, else Near Very Good. Quite possibly the earliest iteration of Ralph Chaplin's now-ubiquitous "Sabo-Tabby," the I.W.W.'s black cat symbol for sabotage. The present work shows the black cat with its claws fully extended while it arches its back on top of a bag of money, coins spilling out. As Chaplin later wrote, "My 'Sab Cat' was supposed to symbolize the 'slow down' as a means of 'striking on the job,'" (cf. https://iww.org/history/icons/black_cat), though many, including the United States government, interpreted it as something much more pernicious. In fact, the accompanying pamphlet, with its cover art and title, raised serious red flags and by the time the United States entered WW1 all copies of Sabotage still in the hands of the I.W.W. were destroyed. The present copy has the small promotional blurb by Jack London dated 1913 on p. 32, though the headquarters address printed on the recto and verso of the rear wrapper, 1001 W. Madison St. in Chicago, indicates that this is a reprint dating around 1917, probably just before an order was made to destroy all copies. MILES 462. (Inventory #: 32077)
$7,500.00 add to cart or Buy Direct from
Lorne Bair Rare Books
Share this item