Dutch Courage and Other Stories 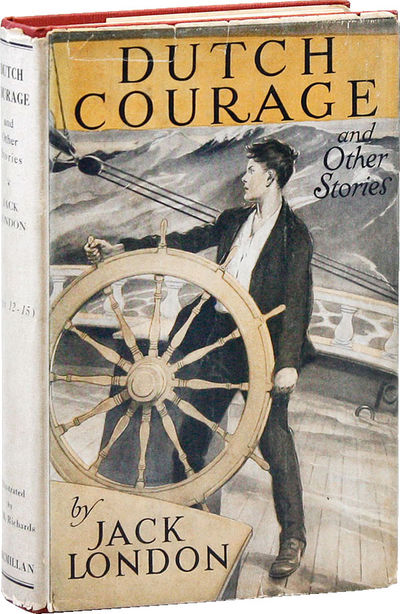 by LONDON, Jack (stories); RICHARDS, George M. (illustrations)
New York: The Macmillan Company, 1922. First Edition. First Printing. Octavo (19.25cm); red cloth, with titling and decorations stamped in gilt on spine and in black on front cover; dustjacket; xii, [4], 180pp; with a photographic frontispiece portrait of the author, and seven inserted black and white illustrations by George M. Richards. Mild offset from jacket flaps onto endpapers, with faint, scattered foxing to text edges; cloth uniformly bright and clean, with the gilt bright and unrubbed; Near Fine. Dustjacket is price-clipped, with front flap trimmed at an odd angle (as with nearly all copies we have seen); mild sunning to spine and front panel, with uniform dust-soil overall; shallow losses to corners, with small nicks to spine ends and a few closed tears; substantially complete, unrestored, and certainly Very Good or better. Posthumously-published work, collecting 10 of London's adventure stories for young readers, and notably including the only book appearance of his first story written for publication, "Typhoon Off the Coast of Japan." With a preface by Charmian London. WOODBRIDGE 164; BAL 11985. (Inventory #: 31542)
$1,500.00 add to cart or Buy Direct from
Lorne Bair Rare Books
Share this item