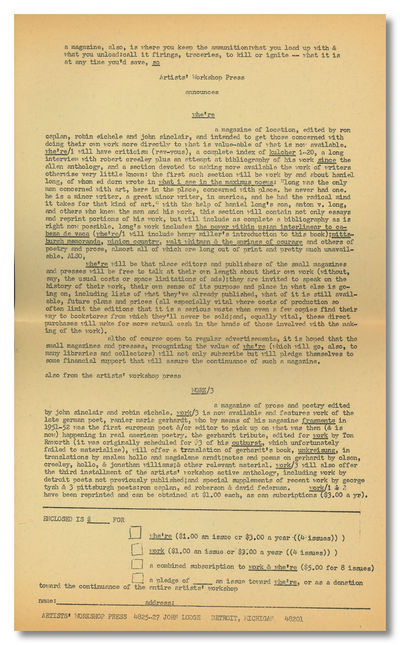 by [Artists Workshop Press]: Sinclair, John [ed]
Detroit: The Artists Workshop Press / Society, 1965. Whole #3 (of 5 published). Quarto. Mimeographed text on tan stock, stapled into pictorial stiff wrappers. Very good to near fine, with the uncommon prospectus for WHE'RE and this issue laid in. Edited by John Sinclair. The most substantial and longest-lived periodical associated with Sinclair and the Artists' Workshop, both significant barometers of the dissent and artistic ferment in the Motor City during these years. Sinclair is most widely known for his work with the MC5 and his founding of the White Panther Party, but his achievements as activist/editor/publisher/poet are substantial. Contributions here include a special section of work by or in tribute to Rainer Gerhardt edited by Tom Raworth, Creeley, J. Williams, Olson, Hollo, Jonas, and installment 3 of the workshop "Active Anthology." CLAY & PHILLIPS, p.303. (Inventory #: WRCLIT78278)
$125.00 add to cart or Buy Direct from
William Reese Co. - Literature
Share this item

THE ATTRACTIONS OF FRANCE

[London] : The Colophon Press , 1993
(click for more details about THE ATTRACTIONS OF FRANCE)
View all from this seller>