The State of Russia Under the Present Czar. 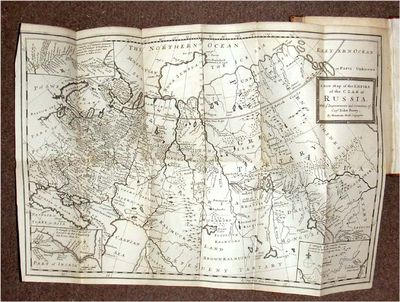 Hardly seems a maritime work but, according to the DNB, "Perry arrived in Russia in the early summer of 1698. He was first employed to report on the possibility of establishing a canal between the rivers Volga and Don... the work was begun in 1700... early in 1702 [he was] ordered to Voronej, on the right bank of the river of that name, to establish a dock. This was completed in 1703, after which Perry was employed in making the Voronej river navigable for ships of war from the city of Voronej to the Don. To 1710 Perry made surveys and engineering work about the river Don." According to this account, the Czar stiffed him, paying him only one year's salary for fourteen years of work. Perry takes his revenge in the introduction to this account. Cox, I, p. 192. The large folding map by Herman Moll is in excellent condition, as is the rest of the book. Bound in old mottled calf, rebacked to match, with spine label. (Inventory #: 39593)
$750.00 add to cart Available from
Ten Pound Island Book Co.
Share this item