A Voyage to Hudson’s Bay, during the summer of 1812. Containing a particular account of the icebergs and other phenomena which presents themselves in those regions; also, a description of the Esquimeaux and North American Indians; their manners, customs, dress, language, &c &c &c (and) Voyage to the North Pole in the Frigate Syrene; Including a Physical and Geographical Notice Relative to the Island of Iceland 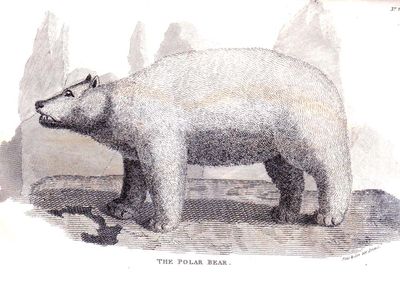 Two titles bound together, with continuous pagination, but individual title pages, published by the industrious Sir Richard Phillips. M’Keevor “who sailed as surgeon on a Hudson Bay Co. vessel’s trip to Fort York discusses the probable marine origin of icebergs, the nature of polar bears and the appearance and habits of Eskimos and Indians.” The six engraved plates are bound at back. Arctic Bib. 10643. Lande 1314. The second title is often lacking, or bound separately. Freminville had been sent north to harass British whalers. It was a successful cruise, but they suffered harsh conditions. Chavanne 191. Sabin 43396. Plates and text clean. Bound in quarter morocco over marbled boards. (Inventory #: 39493)
$650.00 add to cart Available from
Ten Pound Island Book Co.
Share this item