The Book of Common Prayer and Administration of the Sacraments. 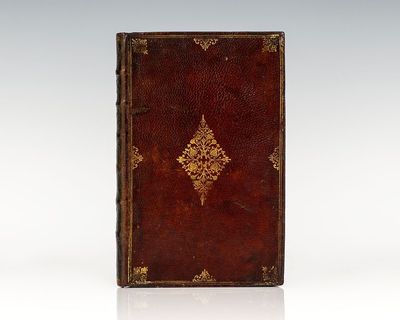 by Prayer Book
Oxford: Clarendon Press, 1828. Nineteenth century Book of Common Prayer. Octavo, bound in contemporary red morocco, engraved throughout, including portraits, illustrations, page borders, with volvelle on the Circular Table, marbled endpapers, all edges gilt. In very good condition, rebacked. The Book of Common Prayer was created out of Thomas Cranmer's desire for a liturgical text that all of Europe's Protestant, English-speaking churches could agree on. Its magisterial liturgical language is, "as a source of spiritual inspiration for most Englishmen second only to the Bible" (PMM 75). The Book of Common Prayer was first issued in 1549 during the reign of Edward VI and revised through the reign of Mary I, James II, and ending significantly in 1832. (Inventory #: 53087)
$1,000.00 add to cart or Buy Direct from
Raptis Rare Books
Share this item